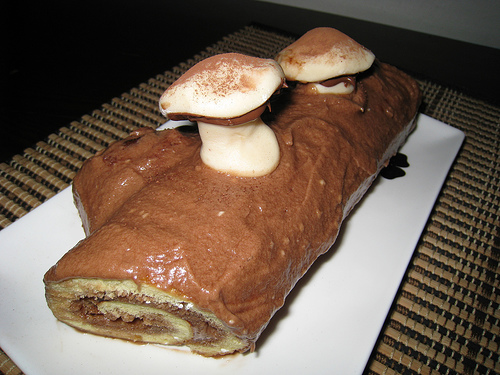 This months Daring Bakers challenge was a Yule Log. A Yule Log is basically a cake that is made to look like a log. I had never seen or heard of a yule log and I was looking forward to making it. I ended up procrastinating until the very end. In fact I just finished making the yule log now. (I really need to try to start the January challenge earlier.) Like many Daring Baker challenges this one had several components including the genoise cake, a butter cream and marzipan mushrooms.
Genoise Cake
The genoise cake looked fairly similar to the sponge cake in the Pumpkin Cake Roll that I made not too long ago. I was a bit surprised by how little flour there is in the cake. It seemed to be mostly eggs… Lots of eggs with lots of beating. It is times like these that I wish I had the space for a mixer! I rolled up my sleeves and pulled out my trusty pair of forks and got to beating. The cake turned out pretty good. It was nice and airy and light. I just went with a plain cake but next time I think that I would flavour it. One step successfully done and two to go.
Chocolate Butter Cream
After all of the beating for the genoise I was looking for a break but to my dismay there was even more beating for the butter cream. This was supposed to be a coffee butter cream but I am not a fan of coffee so I decided to go with a chocolate butter cream. I added a third of a bar of dark chocolate to the eggs and sugar while beating them over the simmering water. This step did not go nearly as well as the first step. The butter cream did not thicken… It was too runny no matter how much I beat it and I did not have enough butter to try making it a second time. In the end I placed it in the fridge for a while and it thickened enough for me to get it on the cake. Despite being a bit runny the butter cream tasted really good!
Marzipan Mushrooms
I was able to find a package that was labeled almond paste/marzipan. The original recipe called for mixing the the almond paste with icing sugar and corn syrup but I found that it already had just the right sweetness and consistency out of the package. Forming the mushrooms was kind of fun. I used some nutella spread to attach the mushroom caps to the stems and I the dusted them with a bit of cocoa powder.
All in all the Yule log turned out pretty good. I had some trouble with the butter cream but it did not detract from the flavour of the cake. I will have to try making some butter cream again in the future so that I can get it right. It was kind of fun to make the cake look like a log and decorate it just for the fun of decorating it. 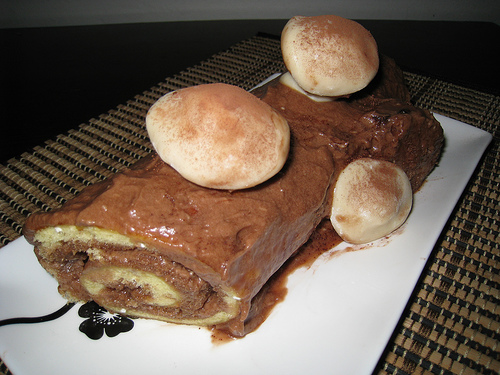 Take a look at the other Daring Bakers Yule Logs.