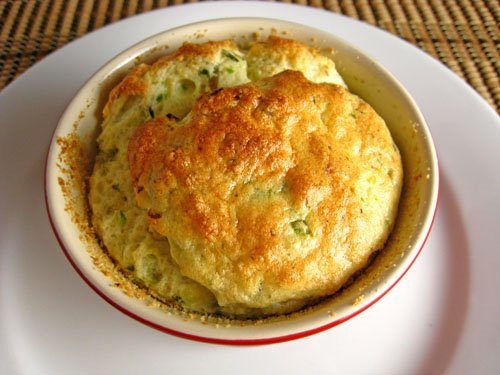 I have been wanting to try making a souffle for a while now. They have seemed a bit intimidating and I had been holding off but when I saw this recipe for an asparagus souffle I just had to try it. I had a lot of fresh local asparagus and this sounded like a perfect way to enjoy some of it. I cut the recipe back a bit as I only had 4 ramekins. I was not sure if playing with the ingredient ratios was a good idea given that souffles are supposed to be a bit challenging to make. This souffle is basically a puree of asparagus mixed into a bechamel sauce that is then folded into some beaten egg whites. I have made bechamel and beaten egg whites several times so the souffle actually came together fairly easily. The ramekins that contain the souffle are in hot water while cooking and this is called a bain marie. I was pleased to see that the souffles puffed up nicely while cooking and I pulled out my camera right away. The souffle deflated quite quickly as I was taking pictures. Souffles are even harder to photograph that melting ice cream! The asparagus souffles were super light and fluffy and moist and good! They did not end up with the dark green colour that I was hoping for but they were really tasty. I think that the next time I make them I will use more asparagus. I really enjoyed the souffle and I now look forward to experimenting with different flavours, both savoury and sweet.