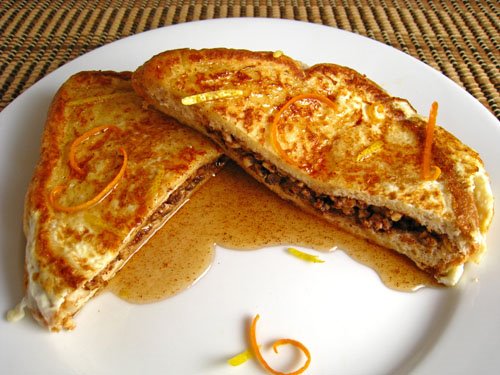 French toast stuffed with a nut and cinnamon filling inspired by the flavours of baklava.

I recently came across the concept of baklava french toast by Elly on elly says opa! . It is basically french toast stuffed with a baklava like filling and then drenched in a honey syrup just like baklava. Baklava is one of my favorite treats and I just had to try the frech toast version. Making the baklava french toast is a bit of work but it is well worth it. The aromas of cinnamon, citrus and honey make the baklava french toast and experience before you even take a bite. When you do take a bite the toast is slightly crisp on the outside and warm and soft and moist on the inside. Then you hit the crunchy nut mixture and are hit with a blast of cinnamon. Covering all of this is a sweet and gooey honey, cinnamon and citrus syrup…mmm… I really enjoyed the baklava french toast! Since it takes a lot less effort to make than baklava it is perfect for when that baklava craving hits and you just don’t have time to make baklava.

French toast stuffed with a nut and cinnamon filling inspired by the flavours of baklava.

Note: *For the lemon and orange rind: wash a lemon/orange well, slice off a thin piece on the rind with a knife not going so deep that you get a lot of white. The white part is bitter and we just want to extract some of the flavour/aroma from the coloured part of the rind.
Similar Recipes:
Baklava
French Toast Stuffed with Blueberries and Cream Cheese
Pumpkin Pie French Toast
Apple Pie French Toast
Sweet Pumpkin Fritters
Bacon and Avocado Monte Cristo Sandwich with Jalapeno Jelly