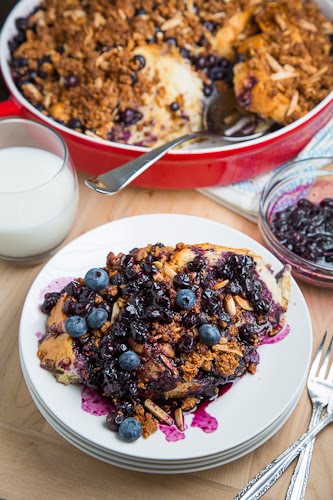 French toast and blueberry crumble collide in this blueberry french toast topped with an amaretti and almond crumble and it is amazing with maple syrup or even better, blueberry maple syrup!

It seems that I have been on a bit of streak with sweet breakfasts lately which is unusual for me but with all of the amazing fruits and berries available these days it has been hard to resist! French toast is a great way to do breakfasts on the weekend and although I normally make it on the stove top, it is also possible to bake it in the oven. For a baked French toast the bread is placed in a baking dish and topped with the egg and milk custard mixture to soak over night and then you simply bake it in the morning making it even easier to make than the stovetop version! In the summer it is so easy to add some fruit or berries to your French toast and make it even better and that is just what I did last weekend when I made this baked blueberry french toast with a few additions to kick it up a notch! 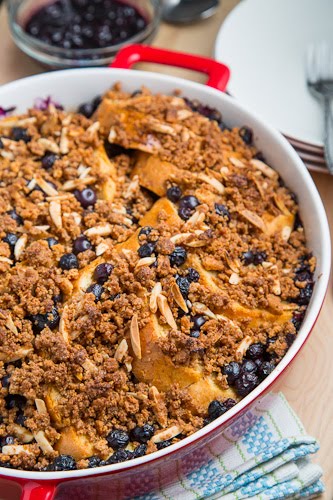 I know that I could have left it at blueberry covered French toast but why not make it even better by topping the French toast with a crumble topping? Normally I would go for a rolled oat and pecan crumble topping with blueberries but this time I had my heart set on a crumbled amaretti cookie and almond sliver topping as almonds and blueberries are also a fabulous flavour combination. Finishing this blueberry French toast off with some maple syrup would have been great but I had some extra blueberries leftover and figured it would be a nice idea to simmer them in the maple syrup first, infusing it with their flavour! 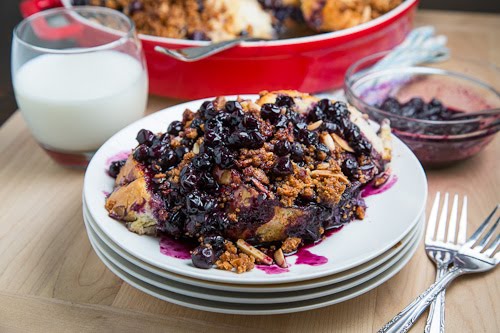 French toast and blueberry crumble collide in this blueberry french toast topped with an amaretti and almond crumble and it is amazing with maple syrup or even better, blueberry maple syrup!

Maple syrup made even better by infusing it with blueberry goodness!