One the the things that I like about weekends is that I have more time to spend on breakfast. Instead of quickly making something so that I can dash out the door on my way to work I have the time to actually make something nice and over the long weekend I took advantage of that. With the recent success of the fresh corn pancakes I had pancakes on my mind though this time I was thinking about blueberry pancakes. Mini blueberry cheesecakes were also dancing through my head and at some point the two ideas collided and I soon found myself obsessing about blueberry cheesecake pancakes! 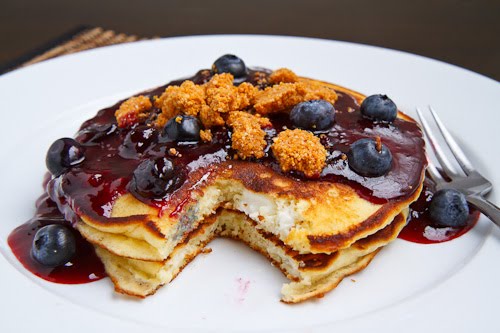 I was thinking that I would keep things simple and start out with a basic pancake recipe that I would add big chunks of cream cheese to and top them with a blueberry sauce and crumbled cheesecake crust. There was however one small problem in that I wanted there to be nice big pieces of cream cheese in the finished pancakes and I was worried that it would melt while the pancakes cooked and disappear just like the cottage cheese does in my cottage cheese pancakes . After thinking about it for a while I decided to try freezing the cream cheese before mixing it into the batter and hopefully that would prevent it from melting too quickly.
The blueberry cheesecake pancakes turned out even better than I had hoped for! Not only did the cream cheese did not disappear but it also remained in nice big chunks in the pancakes that were just on the verge of melting and the hot pockets of cream cheese were absolutely magical! I left the blueberries in the blueberry sauce instead of straining it and it went perfectly with the cheesecake pancakes. The almond flavoured amaretti crumb crust was the final component that really took the pancakes over the edge. These blueberry cheesecake pancakes were a fantastic way to enjoy a lazy home cooked breakfast on the weekend!

A simple blueberry sauce that is perfect for topping vanilla ice cream, yogurt or even pancakes.