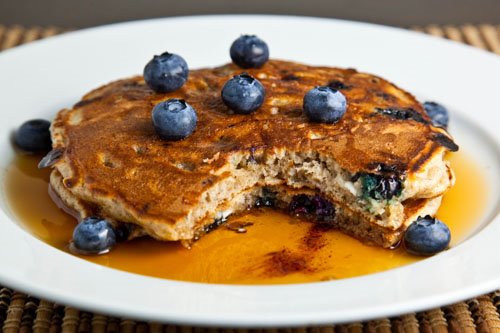 The farmers market has been full of fresh local blueberries for the last week or so and I have certainly been enjoying them. I have mostly been having them for breakfast on plain yogurt or cottage cheese with some maple syrup syrup on top. Over the long weekend I decided that it was time to do something else with them and the first thing that came to mind was pancakes. Blueberry pancakes are a staple every blueberry season and I seem to do something new each time. I had recently come across the idea of a cottage cheese pancake and I thought that they would be even better with some blueberries. The cottage cheese pancakes had a bit more liquid in the batter than I am normally used to but they turned out great! They were nice and moist and light an fluffy and good! Most of the cottage cheese had melted into the pancakes but some of the larger pieces were still visible and they added a really nice texture. Of course I smothered the pancakes in maple syrup which goes really well with blueberries. What a great way to kick off blueberry season!