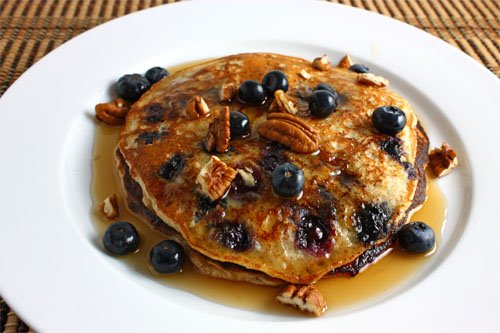 I just could not let blueberry season slip away without making blueberry pancakes at least once. Luckily there were still a lot of blueberries at the farmers market on the weekend and I picked some up. For a recipe, I started with the banana buttermilk pancakes that I had made a while ago and really liked. I have been trying to work more whole wheat flour into my baking lately so I swapped some in for some of the all purpose flour. I replaced the remaining all purpose flour with some ground rolled oats as I had done in the blueberry maple oatmeal muffins that I had just made. The blueberry oatmeal pancakes turned out pretty good. They were a bit more difficult to flip than normal pancakes but they had a nice light texture and they were really moist. I served the pancakes with some maple syrup, blueberries and pecans as garnish. I enjoyed the pancakes so mush that I made them again on the weekend. The second time I made them I enjoyed them with the remaining blueberry maple syrup from the blueberry and shrimp salad from earlier in the week.