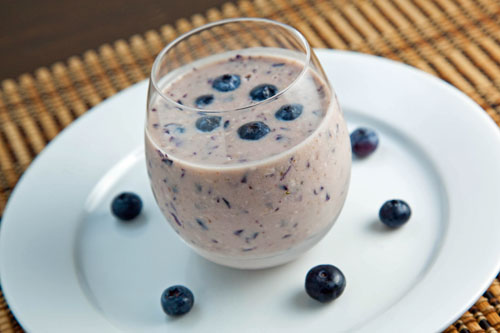 Blueberry season is quickly coming to an end and I have been trying to get as many of the blueberry dishes on my to try list in as I can. The next one on the list was a recipe for a blueberry and maple syrup oat smoothie that I found on Lisa’s Kitchen . The blueberry, maple and oatmeal combo is a really good one and I have used it many times so I knew that this smoothie was going to be really good. I liked the sound of using the rolled oats in a smoothie like this and I just had to try it. The rolled oats are mixed into the yogurt the night before so that they have a chance to soften up for when you turn them into a drink.
Smoothies are one of those things that you can do pretty much whatever you want with them. Once you have determined the primary ingredients that you want you can go wild with the rest. For this smoothie I went with the original recipes idea of using a yogurt base and to that I added some milk to smooth it out a bit, though you could easily use juice or any other liquid. If I had had a banana on hand I would have thrown one in as well but I didn’t so I kept things nice and simple. In the full heat of summer I would have considered adding some vanilla frozen yogurt to make it an even cooler treat. It is hard to beat the cool and refreshing blueberry and maple combo in smoothie form and the the rolled oats added a really nice texture to this smoothie. I definitely look forward to making more of these.