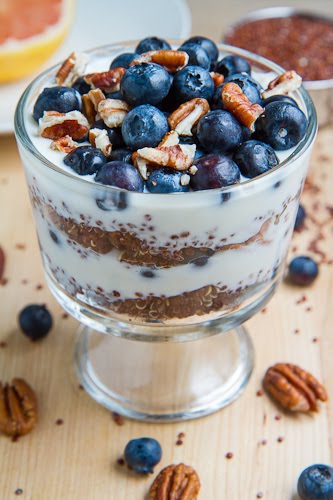 With summer almost here there has been a near constant supply of berries in the stores and this week blueberries were on sale so I picked up a bunch of them. After polishing off a significant amount of them just by snacking on them plain I decided that it was time to do something with them and I knew exactly what that was, a breakfast quinoa parfait. I am a big fan of quinoa and I am always looking for new and interesting ways to use it and the idea for the breakfast quinoa parfait has been on the back of my mind all winter just waiting for the fresh summer berries to show up. The basic idea for the quinoa parfait was to layer quinoa with yogurt and berries and after that you could add pretty much anything else that you like. Since I was using blueberries this time I decided to pair them with some toasted pecans and to use vanilla yogurt though I was also contemplating on going with plain yogurt and then topping the whole thing off with maple syrup.
The soft and tender quinoa worked surprisingly well in the breakfast parfait with the creamy yogurt and the juicy blueberries! One of the good things about making this for breakfast is that you can cook a big batch of the quinoa on the first day and then just pull it out of the fridge and whip up the parfait in a few minutes for the next few days. I am definitely looking forward to making more of these this summer!