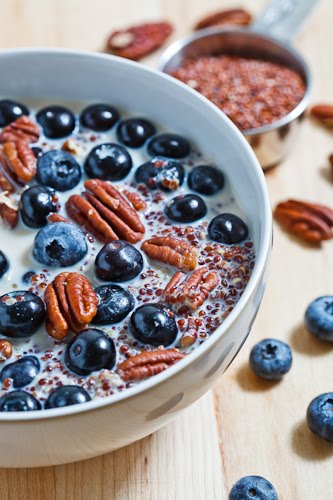 Quinoa served as a breakfast porridge with blueberries, pecans and a touch of maple syrup.

I discovered quinoa shortly after I started food blogging and I have been hooked ever since. Not only is quinoa good for you but I really enjoy its texture so I keep coming back for more. At first I was using it primarily in salads and then I started using it in soups and stews and then I discovered that it could be used in sweet dishes such as porridge and that just blew my mind! I tried a quinoa porridge right away and it was good! Since then it has been one of my staple breakfasts for the colder days of the year. Even though the days are finally staring to warm up, I came across some blueberries in the grocery store and I knew that I would be doing at least one more quinoa porridge before it got too warm. One of my favourite porridge flavour combinations is blueberries, maple and pecans and it goes great in porridges so I did just that a blueberry quinoa porridge sweetened with maple syrup and topped with some toasted pecans.

Quinoa Porridge with Blueberries and Pecans

Quinoa served as a breakfast porridge with blueberries, pecans and a touch of maple syrup.