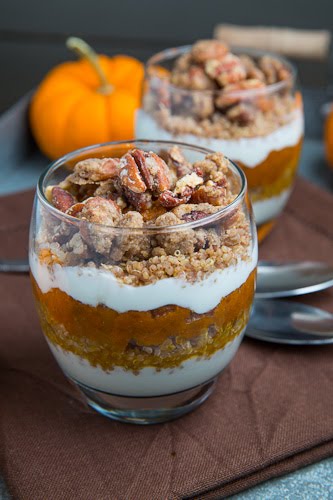 Pumpkin pie parfaits with layers of pumpkin pie, vanilla yogurt and quinoa spiced with cinnamon that is topped off with a gingersnap pecan streusel.

I had some leftover pumpkin puree that I wanted to use and after the apple crumble quinoa parfaits earlier in the week, I knew exactly what I wanted to do with it; pumpkin pie quinoa parfaits! The idea was simple, mix some pumpkin pie spices and brown sugar into the pumpkin puree and layer it with Greek vanilla yogurt and quinoa spiced with cinnamon. At this point everything sounds nice and healthy but I could not resist topping it off with a gingersnap pecan streusel since gingersnaps and pecans go so well with pumpkin pie! Now i am looking forward to quick, tasty and fairly healthy desserts for breakfast from the leftovers for the next few days! 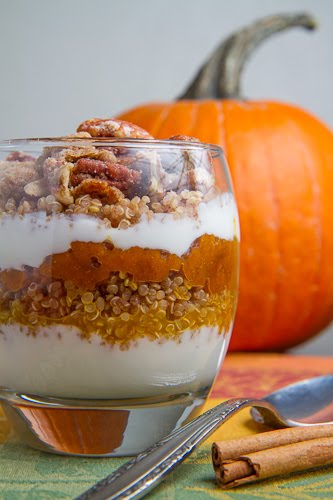 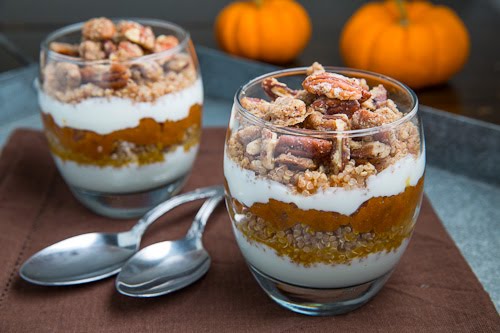 Pumpkin pie parfaits with layers of pumpkin pie, vanilla yogurt and quinoa spiced with cinnamon that is topped off with a gingersnap pecan streusel.