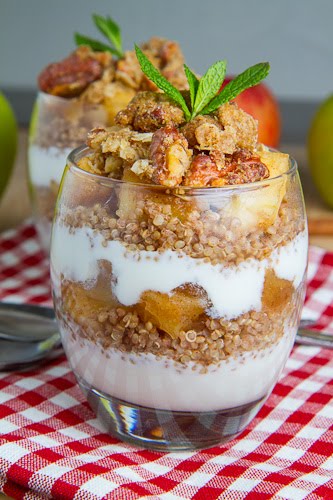 Apple pie parfaits with layers of apple compote, vanilla yogurt and quinoa that is topped off with a rolled oat crumble.

I have been a fan of quinoa ever since I discovered it and I am always looking for new ways to enjoy it. I recently came across the idea of using it in an apple and quinoa parfait with a crumble topping on Epicureean Mom that sounded so good that I had to try it! I have used quinoa in parfaits before so I knew that it worked well in them and that this apple crumble one would be a winner! This parfait layers vanilla yogurt with cinnamon spiced quinoa and a simple apple compote and it is topped with a rolled oat crumble! Not only is this parfait easy to make but it is also pretty healthy and makes for a great breakfast! If you have any leftovers, simply throw the components into separate containers and refrigerate them all except the crumble topping and the next day you can use them to throw another parfait together in a few minutes. 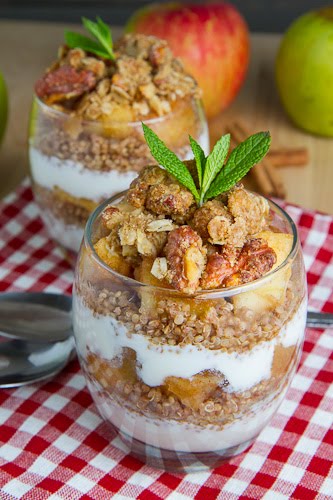 Of course everything apple tastes better with caramel sauce ! Caramel covered apple crumble for breakfast! Now that is living! 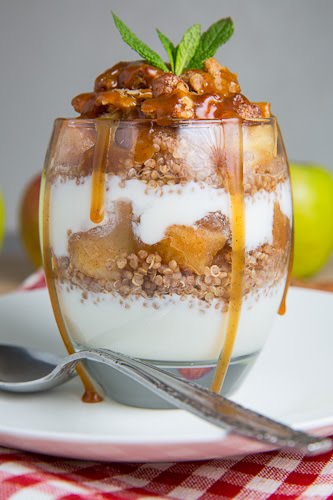 Apple pie parfaits with layers of apple compote, vanilla yogurt and quinoa that is topped off with a rolled oat crumble.