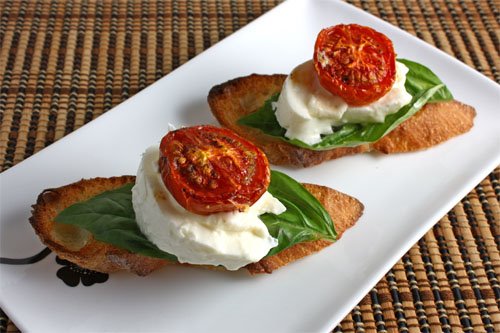 I was at the cheese shop waiting in line when something green under the glass caught my attention. I looked closer and saw that the package was labeled burrata! I immediately remembered that this was the cheese that I had been looking for! I remembered reading about burrata on Proud Italian Cook and thinking that I would have to keep an eye out for it. Burrata is a fresh Italian cheese that is made with mozzarella and cream where the cream is on the inside of a ball of mozzarella. I asked for some burrata right away and I was asked if I wanted Italian imported of local Canadian. Since I already had a bunch of cheese in my hands I went for the local which was the cheaper of the two. I decided to keep it simple and served it on some crostini with a roasted tomato and fresh basil. The burrata was really good! It was nice and soft and super creamy on the inside. It had a really subtle flavour which I found quite enjoyable. When served in the crostini the flavour of the burrata was overshadowed by the rest of the flavours but the texture really shone through as a winner. I will be getting this cheese again.