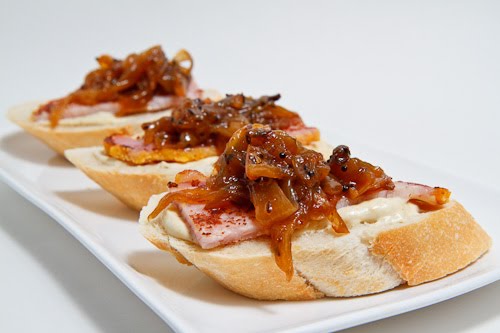 The inspiration for making the onion chutney was a peameal bacon crostini with onion relish and mustard by kozliks that I recently got the chance to try. Since I did not get a recipe I got the chance to make up my own. With the onion chutney filling in for the onion relish I had the hard part done and the only thing left was the mustard. I was pretty sure that it was not just plain mustard as it was milder than I would expect and it was a bit tangier and the closest thing that I could think of was a mixture of mayo and mustard. After a bit of experimenting I came to a ratio of 3 parts mayo to 1 part mustard and I was ready to go. I was planning on toasting up the baguette slices but the baguette was so nice and fresh that it seemed a shame so I served it as is with its slightly crisp and chewy crust and its melt in your mouth soft inside. The sweet onion chutney went so well with the salty peameal bacon and tangy mayo mustard that had a perfect amount of bite to finish everything off. The only problem with this crostini was that it disappeared too quickly. Next time I will have to double it and only bring out half. That way there will be lots of leftovers. 🙂 The day after I made a peameal bacon, onion chutney and mayo mustard sandwich which was also really good.