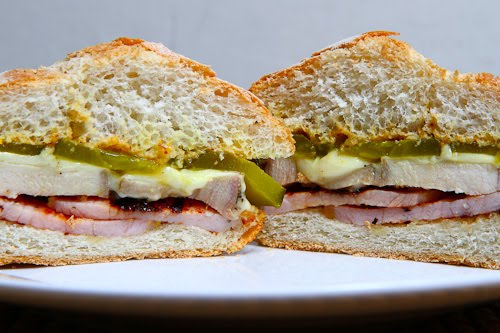 The Cuban sandwich has been on my to try list for a long time and with the last of my roast pork leftovers on hand I kept thinking about it. A Cuban sandwich is typically made with layers of roast pork, ham, swiss cheese, pickles and mustard and it is grilled until it is nice and toasty and the cheese melts. Never mind that my roast pork was a Montreal steak spiced seasoned maple bacon wrapped roast pork rather than a mojo marinated roast pork. Never mind that I did not have the ham on hand. I could not get the idea of the Cuban sandwich out of my head. After a bit of thinking I decided to use the roast pork that I did have and I simply replaced the ham with some peameal bacon that I did have on hand. That is three kinds of pork in one sandwich with the roast pork, maple bacon and peameal bacon! You just can’t go wrong with starting out with that combo! From there I finished the sandwich off as it should be with the swiss cheese, pickles and mustard. I guess in the end I had a kind of Canadian take on a Cuban sandwich and it turned out really well! The salty peameal bacon went well with the tender and slightly sweet maple roast pork and the melted cheese, pickles and mustard finished off the sandwich nicely. With this version of the sandwich being so good I can imagine what the original tastes like and I am going to have to try it soon.