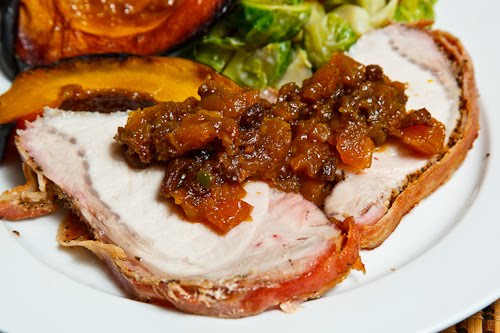 Ever since I first heard about wrapping a pork loin in bacon before roasting it I have been wanting to try it! Now that the cooler weather is here it is time for more comfort food and the bacon wrapped pork loin quickly made it to my meal plan. I was thinking that I would keep the roast pork loin nice and simple and just go with a rub of some Montreal steak spice but when I was at he grocery store picking up the bacon they had maple bacon on sale and I could not pass up on adding a maple theme to the roast. So I covered the pork loin in maple syrup followed by the spice rub and then I wrapped it all in the maple bacon. After the pork roast was almost done cooking I glazed it in some more maple syrup. The bacon wrapped maple roast pork turned out so amazingly well! The bacon wrapping helped keep the pork loin nice and moist and juicy and good. The sweet and salty bacon went so well with the spice rub and the maple flavour! I found myself going back for seconds and thirds of the roast pork before I knew it. I had planned on making the bacon wrapped roast pork at the same time as the apple chutney as apples and pork are always a nice combo and I thought that the spicy apple chutney would go well with the bacony pork. I also served the roast pork with some maple roasted acorn squas h and some brussels sprouts and bacon covered in melted gorgonzola .