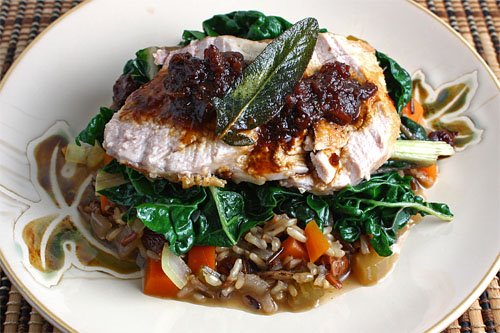 I came across this recipe for a roasted pork tenderloin with apple gravy on greens and apple wild rice a while ago on Inspired Bites and I knew right away that I would have to make it. I really liked every aspect of this one dish meal, from the pork and apple flavour combo to my newly found favorite, swiss chard, to the wild rice that I had been wanting to try. It almost seed like a perfect meal and with apples every where it seemed like the perfect time to make it.
I only made a few changes to the apple gravy recipe by adding some sage which I had on hand and a pinch of cinnamon. Both sage and cinnamon go well with apples and I thought they would add some nice extra layers of flavour. I used some of my own roasted apple sauce in the gravy for even more flavour. The apple cider that I used was freshly made and bottled by local farmers and I picked it up at the farmers market. In the end I thought that there were so many good things in the gravy that it would be a shame to strain them out so I left them in and went with a thicker gravy. I accidentally grabbed the dark soy and my gravy turned out pretty dark but it did not adversely affect the flavour. I garnished the dish with some crispy butter fried sage.
The roasted pork tenderloin with apple gravy turn out great! This was the first time that I have cooked a pork tenderloin and I am glad that I shelled out the extra cash for it as it was so moist and tender and good. The pork would have been great without anything on it but the gravy was so tasty and flavourful that it took it to whole new levels of delightfulness. The gravy was full of appley goodness and the apple sauce and raisins added a nice sweetness to it. The salty soy sauce balanced out the sweetness and the touch of cinnamon added a nice hint of exotic. Luckily this recipe made enough that I will have tasty leftovers for quick lunches and dinners this week.

Similar Recipes:
Pork Chop with Apple, Sage and Pancetta
Chicken and Chanterelles on Spinach and Wild Rice
Sausage on Lentils and Greens