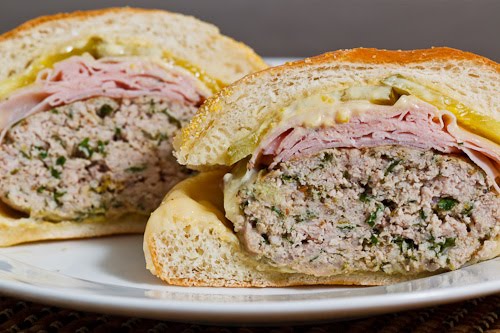 My next concept burger experiment of the summer is inspired by the cuban sandwich consisting of roast pork, ham, swiss cheese, pickles, mustard and/or mayonnaise. Given that the primary meat in the sandwich was pork, using ground pork to form the patties only seemed natural. Very often the roast post for the cubano sandwich is seasoned with mojo so and I included some of the flavour elements from mojo seasoning in the burgers including garlic, cilantro, lime, oregano and cumin. With that the cuban burgers were pretty much done.
One of the things that I like so much about burgers is that it is pretty much as easy as mixing a few ingredients into the ground meat, forming patties and then throwing them on the grill for a few minutes. Another thing that is nice about burgers is that even though you can make the patty itself super tasty like this one, you don’t need to stop there as you can continue on and fill the bun with even more flavours. In this case I added the sliced deli ham along with some melted swiss cheese, the pickles and some mustard. I added one final, not so secret ingredient, a roasted garlic mayo that I had made for the side that I served with the burgers and it really took them over the edge adding to an already amazing flavour combination!