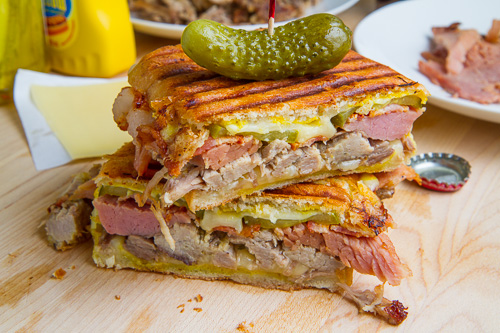 At the beginning of the week I had plenty of freshly minted leftover Cuban roast pork (lechon asado) and of course the first thing that I thought to use it in was a sandwich, a Cuban sandwich in particular. The Cuban sandwich , popularized in Florida, consists of roast pork, ham, swiss cheese, yellow mustard and pickles and it is generally ‘pressed’ when grilled. As

luck
planning would have it, I also just happened to also have some roast ham on hand so I was all set to make some Cuban sandwiches! These sandwiches are really easy to make, you pretty much just assemble the sandwich and grill it in a panini press. (I don’t have a panini press so I just used a grill pan and ‘pressed’ down on the sandwich with a mixing bowl.) Despite being so simple, the Cuban sandwich is packed full of flavour and all of the flavours work so well together! The Cuban sandwich works particularly well with the lechon asado that has been marinated in the sour orange and garlic mojo and if you have any extra mojo on hand, throw some into the sandwich or dip your sandwich into it for even more kick! If you are using lechon asado for your roast pork and if you had any crackling, add some to the sandwich for a tasty crunchy texture! These sandwiches certainly are a great way to enjoy some of the leftover Cuban roast pork (lechon asado) ! 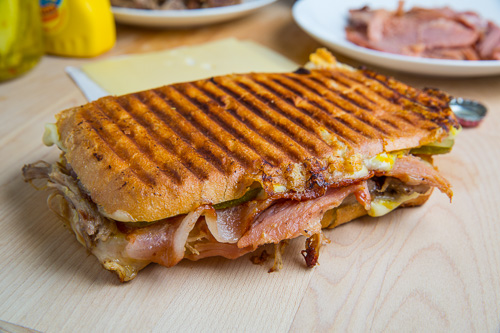 While I was enjoying my first Cuban sandwich earlier in the week, I was thinking abut how pork heavy the sandwich was with roast pork and ham and I could not resist the temptation to add some salty smoked bacon the the next one to make for an amazing pork trifecta! 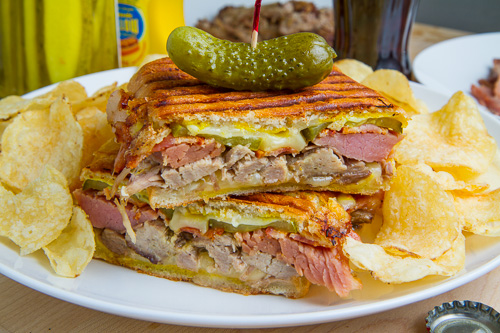