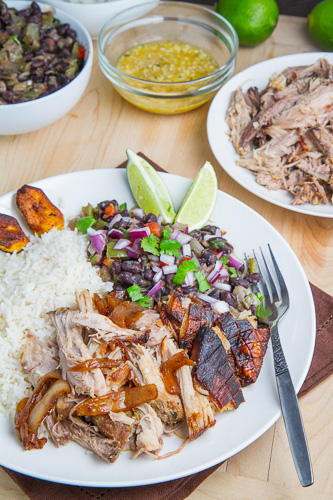 One project that I have been wanting to try for a while was making a Cuban style roast pork and with a recent sale it was the right time to make it! Cuban style roast pork, aka lechon asado , is traditionally made by roasting a whole pig until cooked and the skin is nice and crispy but at home it is much easier to make a smaller cut of pork, say the shoulder or picnic cut and roast it in the oven. Lechon asado is made in many different spanish speaking countries and what makes this one Cuban is the Cuban style mojo sauce marinade. The mojo sauce is made with sour orange juice and
plenty or garlic along with some oregano and cumin and it is used to both marinate the pork before roasting and also at the table for drizzling or dipping.
Since this recipe is an in home adaptation of roasting a whole pig, there are several ways in which you could cook the pork. Cooking the pork in a slow cooker would be the easiest solution but since the picnic cut of the pork shoulder comes with the skin on I wanted to roast it in the oven to get some nice and crispy crackling. The first step was to make the mojo sauce and most recipes called for pureeing the sauce in a blender until smooth but since I do not have a blender I went with my food processor and ended up with a slightly chunkier version, though I kind of liked those nice chunks of garlic and it certainly tasted pretty amazing anyways. Next up was marinating the meat in the mojo over night which was pretty easy but it did create some difficulties with my desire to get some crispy crackling as wet skin does not crackle well. In the end I decided to pull the pork out of the marinade and early, pat the skin dry and let it dry out for an hour before scoring it the skin and rubbing in some salt. You can serve your Cuban style roast pork in one of two ways, sliced or pulled and the only really difference is how long you cook it. To get the crackling I started out by roasting the pork at a high temperature until the skin got nice and crispy and then I lowered the temperature to continue roasting until the pork was cooked. In the end I was able to get the crackling that I was after but it was more of a blackend crackling which was still addictively tasty but I did need to cover the pork with foil part way through cooking to prevent it from burning.
Once the pork was done roasting I pulled it out of the oven and while I let it rest and cool down before pulling it I caramelized onions in some of the mixture of mojo and juices from the bottom of the pan to mix into the pulled pork. When I marinated the pork I made sure to reserve some of the mojo to both mix into the pull pork and to serve with the meal for even more mojo-y goodness! I have to say that this Cuban style roast pork with crackling was an amazingly successful and fabulously tasty project that is definitely worth making for your family Sunday night dinner!
(Of course you all know that I did not make a roast pork just for the initial roast pork dinner! Keep an eye out for what I use the Cuban style roast pork in next!) 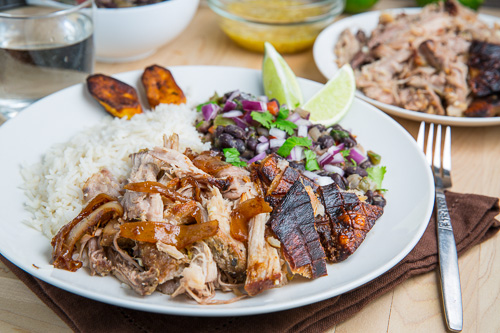 I served the Cuban style roast pork with rice, Cuban style black beans (recipe to come) and fried plantain in addition to plenty of extra mojo sauce. This was one truly tasty and satisfying meal and luckily I have plenty of leftovers for quick meals during the week! 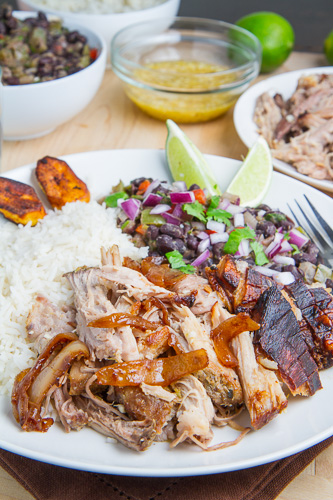