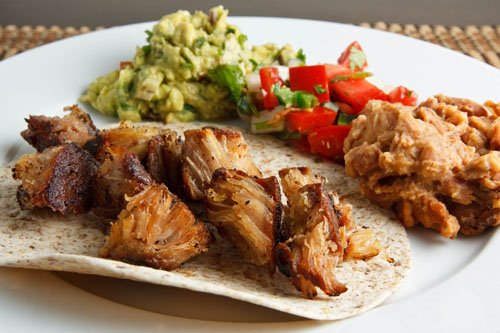 Mexican cuisine is one of my favorites and I often find myself craving those flavours that I like so much. Last week the craving were getting stronger and I satisfied them on the weekend by making carnitas. Carnitas is pork that is traditionally braised in lard on low heat until it is falling apart tender and then the heat is increased so that the pork begins to get crispy on the outside. This combination of moist and tender pork with a slightly crispy outside is simply amazing! The only problem is that cooking the pork in lard does not sound too appetizing. As an alternative, the last time that I made carnitas I simmered the pork in salsa verde until it was falling apart tender and then I shredded it and roasted it in the oven until it was nice and crispy on the outside. I then mixed the pork back into the remaining salsa verde.
The salsa verde carnitas were really good but I recently came across a new method of making carnitas on Homesick Texan that intrigued me. This recipe called for braising the pork in water for the first few hours and then increasing the heat and cooking it until the water had evaporated leaving the rendered pork fat. The pork is then cooked in the rendered pork fat, effectively frying the outside of the pork until it is crispy. The pork is then shredded and ready to go. Although this would probably still not be the same as cooking it in lard, it sounded like a great compromise that would have a very similar results and I just had to try it.
This way of making carnitas was really simple, requiring very little effort and just a bit of patience. I added some spices to the liquid while the pork was simmering to add some aromatics and a touch of flavour. The carnitas turned out great! I left them in fairly large chunks and they were nice and crispy on the outside and moist and tender on the inside. What a great mix of contrasting textures. I will definitely be making carnitas like this again. I served the carnitas with tortillas, refried beans , guacamole and pico de gallo . I have been enjoying the carnitas all week and they have satisfied my Mexican cuisine cravings for now.