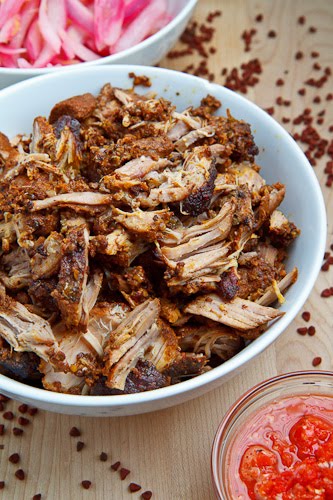 I recently had the pleasure of attending a Mexican Gastronomy event put on by the Minister of tourism of Mexico at the Royal Ontario Museum where we got a sneak peak at the Maya: Secrets of their Ancient World exhibit. While there I enjoyed some really tasty Mexican cuisine including pollo pibil, chicken marinated in a red paste made with annatto seeds. Having the pollo pibil that night reminded me that I had been wanting to try making cochinita pibil, or puerco pibil , for a while now and it was the perfect inspiration to get to it. Cochinita pibil is a dish where pork is marinated in a mixture of annatto seeds and sour orange juice and it is then slowly baked, wrapped in banana leaves, until it is nice and tender. Traditionally cochinita pibil uses a whole pig and it is baked underground but with some quick modifications to the recipe you can easily make it at home in your oven.
Although cochinita pibil might sound a little intimidating, this recipe is actually pretty easy to make! You should be able to find the annatto seeds at a local Latin grocery store where you can also find premade annatto marinades along with the banana leaves. If you cannot get a hold of the seville oranges or other sour oranges you can replace them with a mixture of regular orange juice and lime juice. Aluminum foil works as a more convenient replacement for the banana leaves if you have trouble tracking them down as well. Once you have all of the ingredients, the cochinita pibil is as easy to make as marinating the pork and then baking it in your oven.
One of the things that I like so much about dishes like cochinita pibil is that once you have made it you are really just at the beginning! The cochinita pibil is amazing all by itself but you can use it as an ingredients to make many different things like taocs, tostadas, sandwiches, etc. Really the sky is the limit and I can’t wait to experiment with the cochinita pibil!