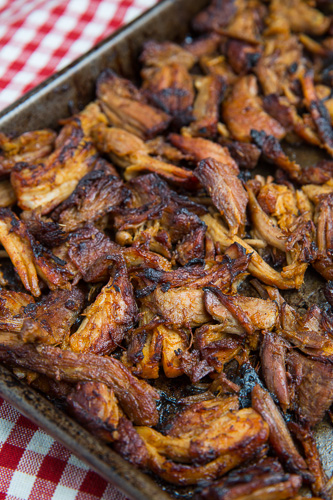 A healthier version of carnitas, a Mexican style braised pulled pork that is broiled until crispy on the outside but is still moist and tender on the inside and it’s just packed with flavour!

Carnitas are a Mexican pulled pork dish where the pork is crispy on the outside and moist and tender on the inside. Traditionally a pork butt or shoulder is braised in lard until tender and then the heat is turned up so that the pork fries and gets crispy on the outside. For todays home cook looking to replicate carnitas an easier way is to simmer the same fatty cut of pork, a butt or shoulder, in a liquid until the pork is tender, then to turn up the heat until the liquid is gone and the fat has rendered and then let the pork fry in its own rendered fat until crispy. This is the way that I have been enjoying carnitas for a while but I wanted to try something a little lighter without having to sacrifice anything in the way of flavour.
The way I see it there are 3 required characteristics of carnitas including that it is a pulled pork, that it is moist and tender and crispy at the same time and that it is full of flavour, so that is what I was seeking with this new recipe. I decided to use the same cut of pork, the butt or shoulder, but this time I trimmed the excess fat to make it lighter. To start building up the flavour the pork is browned in the pan and then all of those brown bits of tastiness from the bottom of the pan are scraped up into the simmering liquid. The pork is then simmered in a simple orange, lime and garlic mojo style liquid until tender but this time it is simmered covered to retain the liquid which is just packed with flavour. After the pork has cooked the liquid is skimmed of ant remaining fat, reduced and concentrated and then mixed into the pork before it is broiled until crispy. The final result is indeed a super tasty pulled pork that is both moist and tender and crispy at the same time and simply irresistible!
Note: This recipe can easy be made in a slow cooker or crockpot and I have included the instructions for that in the recipe below. 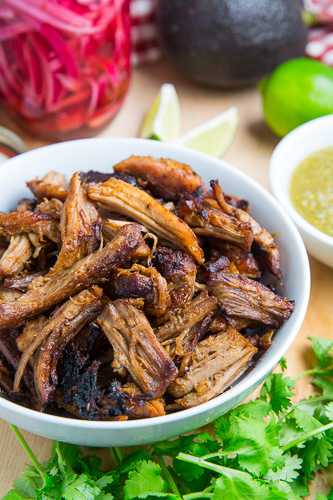 These pork carnitas are so tasty that I could easily finish off an entire batch all by itself with a fork before it even got a chance to leave the broiling pan! Just look at all of that crispy pork goodness! 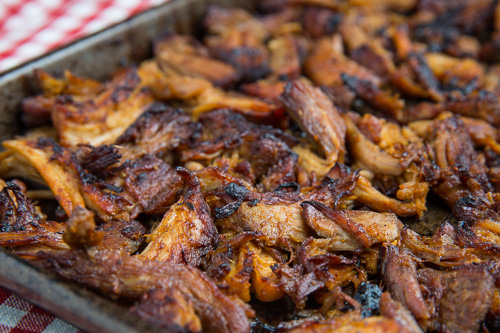 A healthier version of carnitas, a Mexican style braised pulled pork that is broiled until crispy on the outside but is still moist and tender on the inside and it’s just packed with flavour!

Option: If you want to skip browning the meat, you can, but this adds a lot of flavour. If you are using the slow cooker and do not want to brown the meat in the morning you can brown it the night before and keep the meat and the water with the scraped brown bits in the fridge overnight.
Nutrition Facts: Calories 436, Fat 32g (Saturated 10g, Trans 0), Cholesterol 120mg, Sodium 421mg, Carbs 4g (Fiber 0.5g, Sugars 2g), Protein 29g
Nutrition by: