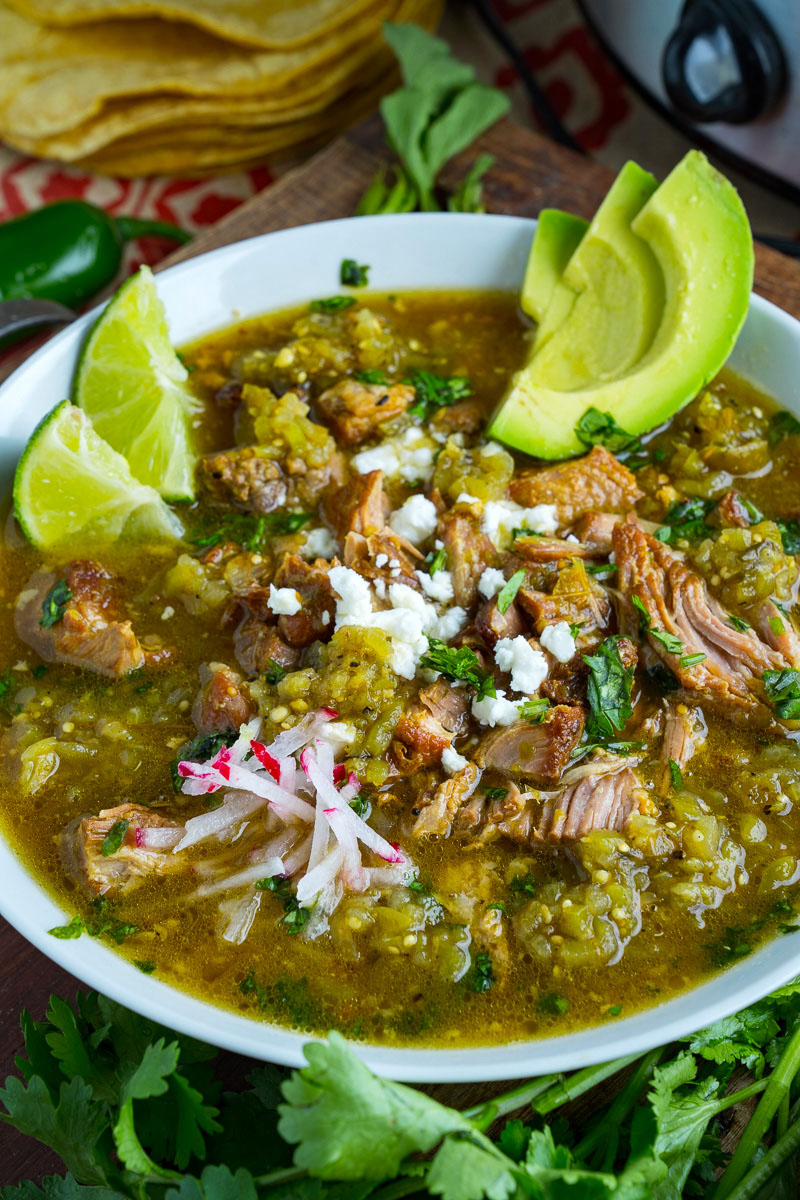 A Mexican style pork stew in a tasty salsa verde that is slowly braised until the pork melts into your mouth!

This chili verde is one of my favourite recipes and when I was making it the other day I thought that it was a great opportunity to take some new photos and update the recipe! Authentic chili verde is a chili, the dish, consisting of pork and chili peppers, in this case green ones like poblano peppers and jalapeno peppers. The sauce is filled out out with roasted tomatillos, onion, garlic and broth and after the pork is cut into small pieces and browned it is simmered in it until it’s melt in your mouth tender! It’s that easy! Pork simmered/braised in salsa verde and it’s so good! I like to serve this like a stew topped with garnishes like limes, avocados, sour cream, radish, cheese, etc but it’s also great as a filling for tacos, burritos, etc. This traditional pork chili verde is perfect for cool fall evenings and any leftovers only get better the next day! 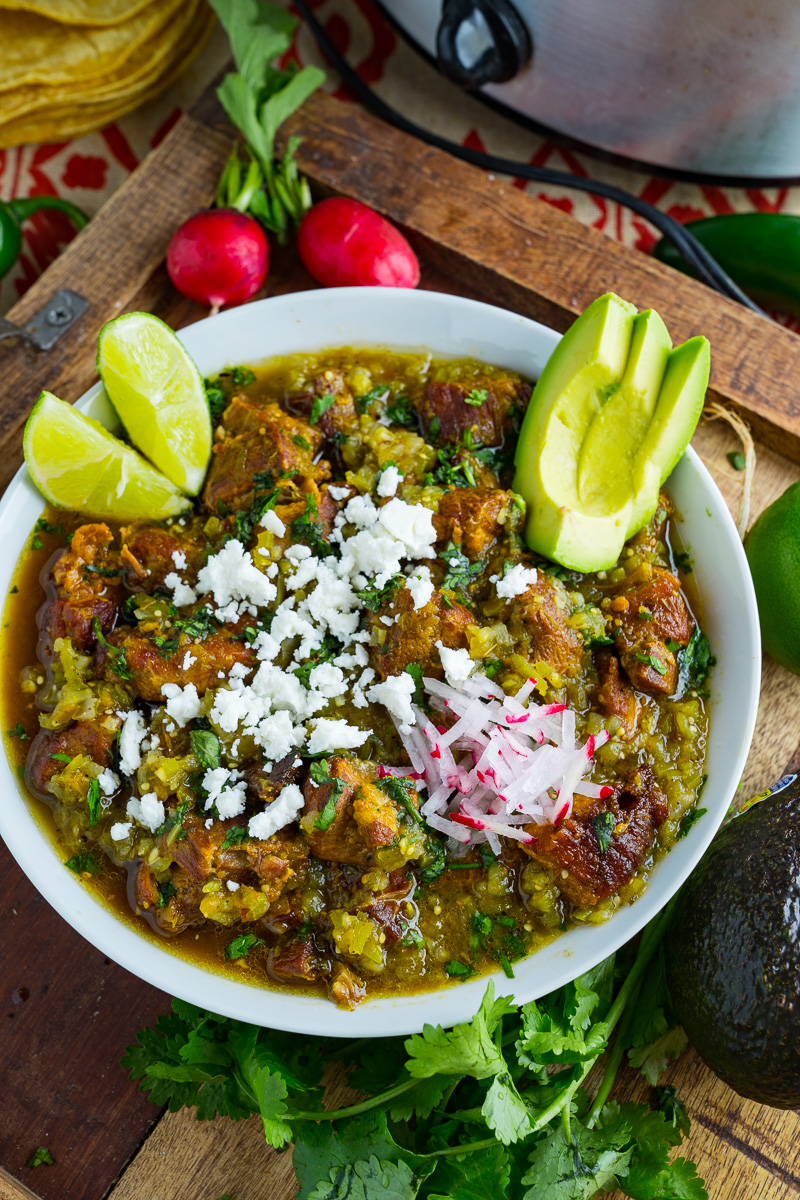 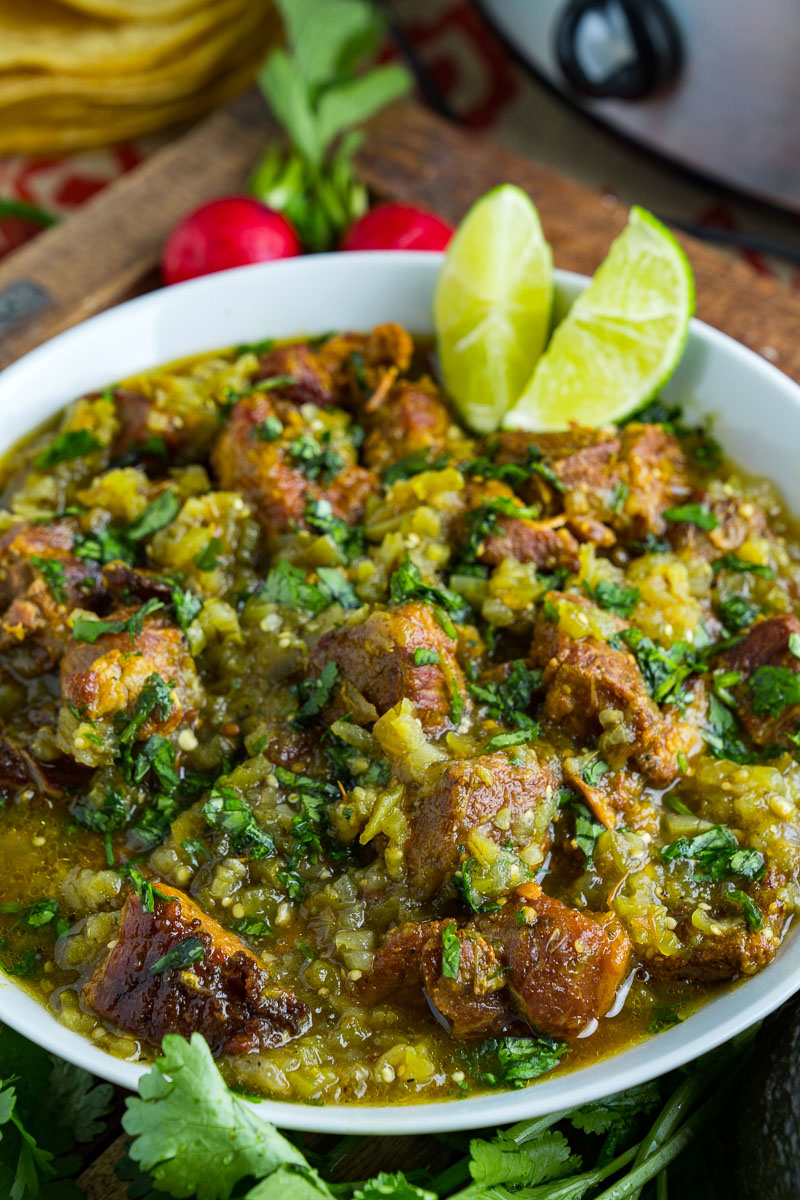 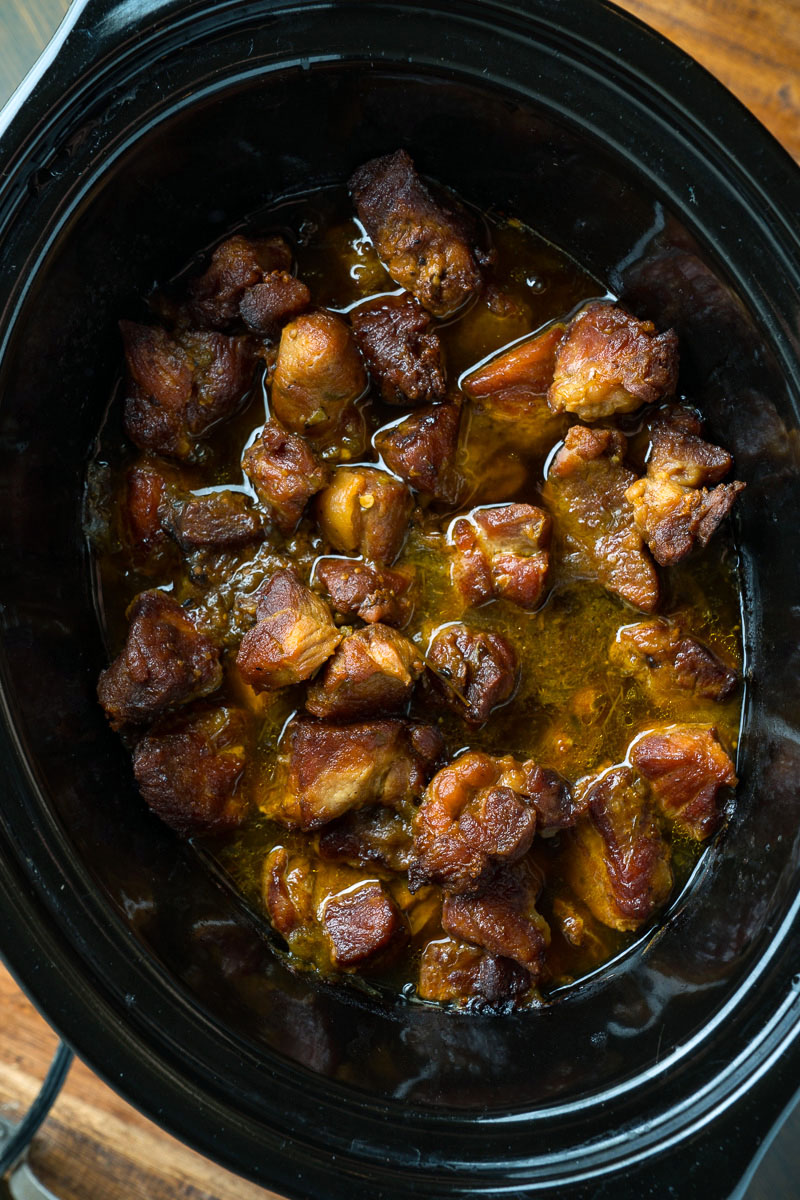 Slow cooker chili verde is an even easier way to go! 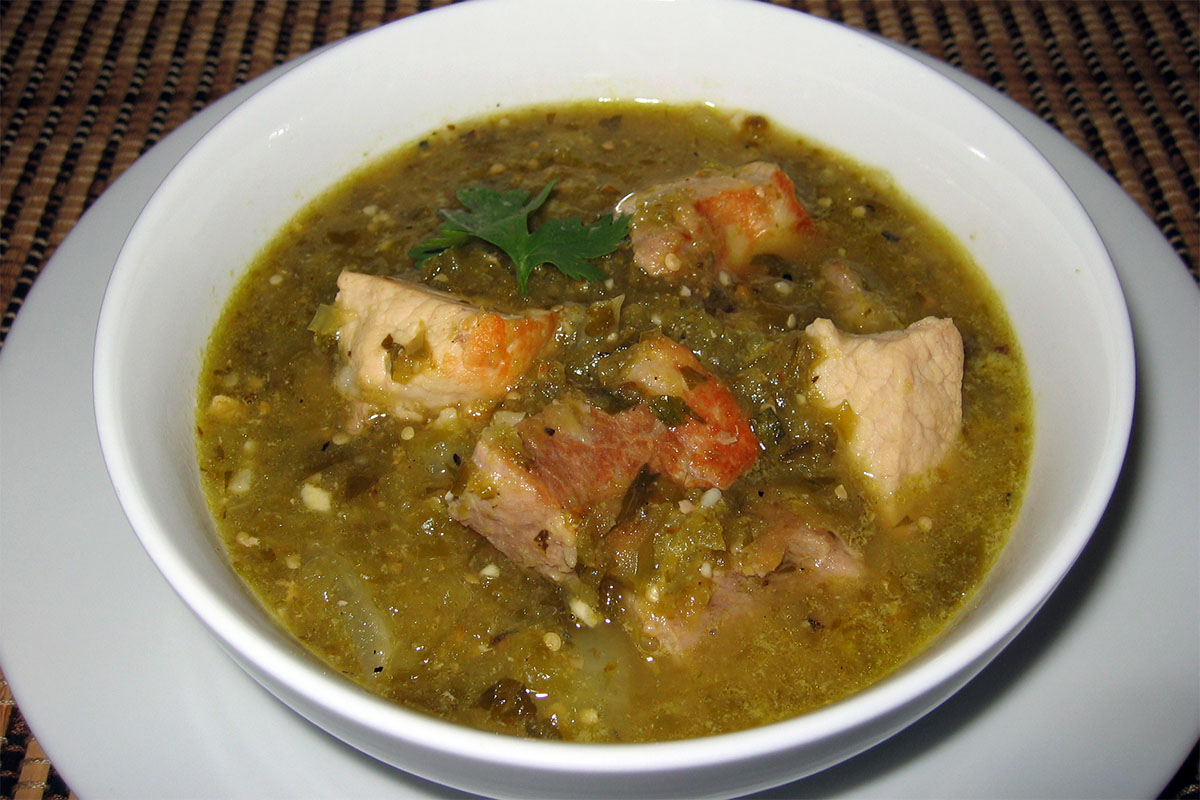 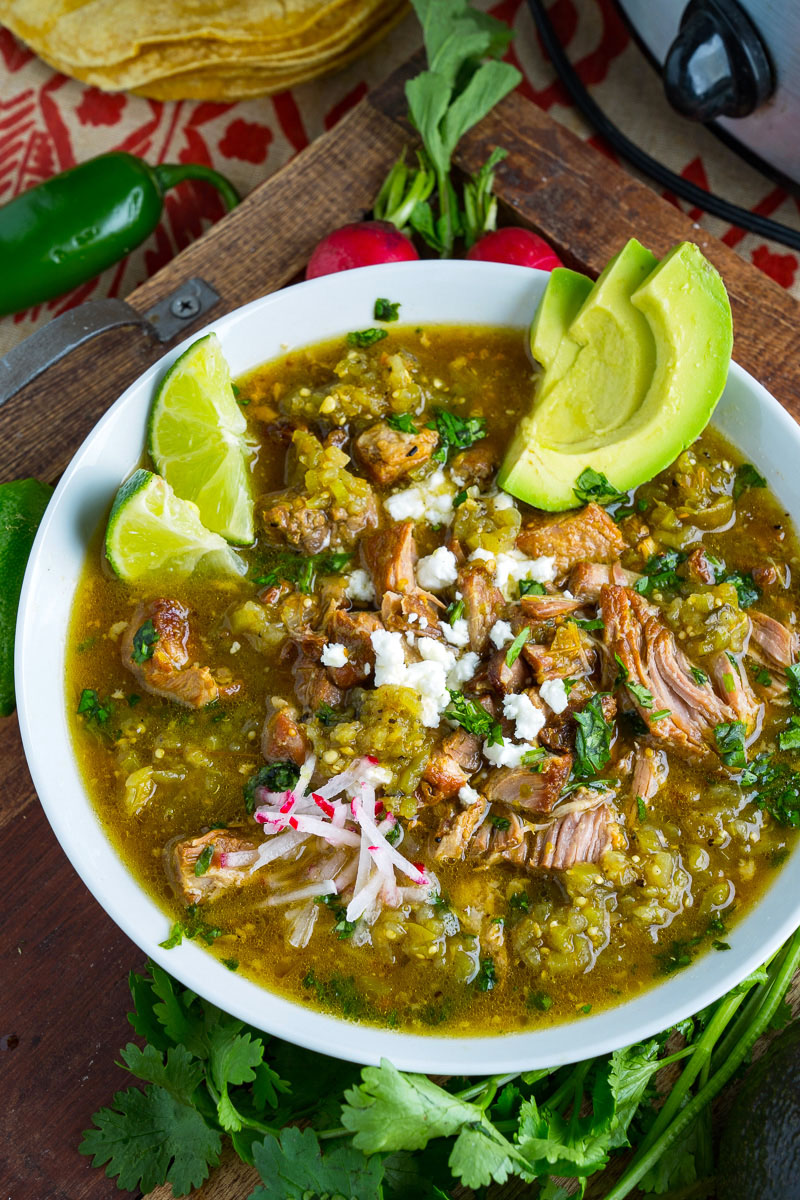 A Mexican style pork stew in a tasty salsa verde that is slowly braised until the pork melts into your mouth!

Option: Serve with your favourite chili topping like, limes, avocado, radish, sour cream, crumbled queso fresco or cotija, etc.
Option: Skip step one and replace the first 6 ingredients with 2 cups of store bought salsa verde to keep things quick and easy!
Option: Skip step two and use un-browned meat.
Option: Blister/char the tomatillos, peppers, onion and garlic over an open flame in in a heavy bottom skillet over high heat instead of broiling.
Option: After the chili is ready, transfer it to the fridge and chill overnight before skimming off the fat/grease and reheating to serve. (This will significantly reduce the fat content but reduce the flavour.)
Option: Add a ham bone or use ham broth to kick up the pork flavour!
Option: Save half of the tomatillo salsa and place it in the stew after it has simmered so that it retains a bit more of it’s green colour.
Option: Mix in a pureed avocado just before serving to thicken the stew and make it creamier!
Option: Add potatoes or white beans to make it even heartier.
Option: If you want more of a soup, add more broth if you want more of a stew, cut back on broth.
Option: Shred the pork. (Further Option: Use the shredded pork in salsa verde as an ingredient in other recipes like tacos, burritos, quesadillas, etc.!
Note: The flavour improves with time so the leftovers will be even better.
Nutrition Facts: Calories 401, Fat 25g (Saturated 7g, Trans 0.1g), Cholesterol 105mg, Sodium 117mg, Carbs 10g (Fiber 2g, Sugars 6g), Protein 31g
Nutrition by: