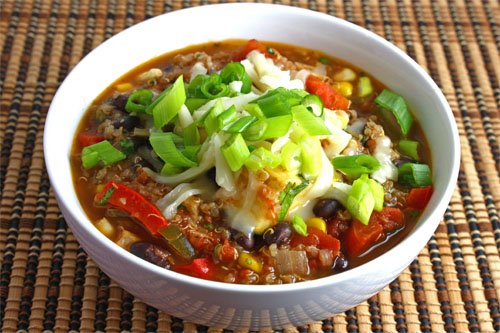 A healthy, hearty and tasty vegetarian chili with back beans and quinoa that does not sacrifice anything in flavour.

Sometimes recipes can take on a life of their own. A while ago I came across a three bean chili recipe which sounded good and this week it made it onto my meal plan. It started out as a pretty simple bean chili but as the week went on I thought that it would be nice it there was some quinoa in it. Then I thought that some bell peppers would add some colour. As it came time to cook it I noticed that I had some zucchini in the fridge that needed finishing. And then there was that last cob of corn… Before I knew it my pot was full and I had only added one of the beans. What had started out as a three bean chili had quickly turned into a nice vegetables chili. Chilies like this are really easy to make and full of flavour. As far as the vegetables go, you can add whatever you want or whatever is in season. In the winter I like to add squash and in the summer there are so many options. I am particularly looking forward to fresh tomatillos as they add a ton of flavour. You can garnish chili with lots of different things and this time I went with some monterey jack cheese and green onions. One of my favorite things about making a chili is that there is a lot of leftovers that are convenient to bring to work for lunch.

A healthy, hearty and tasty vegetarian chili with back beans and quinoa that does not sacrifice anything in flavour.