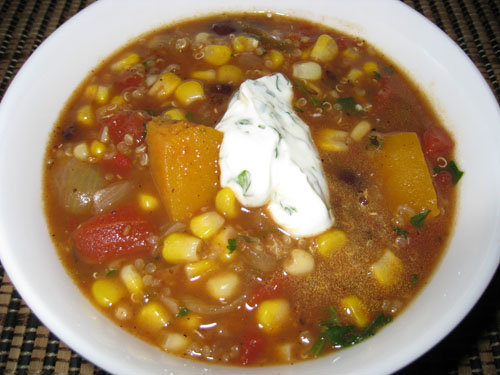 When I heard about the No Croutons Required event I knew that I wanted to take part. The February theme was vegetarian soups. The only problem was that I had no idea what kind of soup to make. While I was looking for ideas I had the Food Network on in the background and they were talking about Mexican cuisine. They mentioned that some of the regional staples were corn, beans and squash. Those three ingredients sounded like a perfect start to a tasty soup. I added some more regional flavours such as chilies, tomatoes, tomatillos and cumin. I had also been wanting to try using quinoa in a soup and this was a great chance.
Back when the tomatillos were in season I froze a bunch of them and now was the perfect time to pull them out and see how they did. Luckily the tomatillos froze really well and I was about to make some tasty salsa verde to add to the soup.
Although the soup is not the most photogenic it turned out to be really tasty. A nice hot and spicy soup for the cold days that we have been having. I thought that the quinoa added a nice texture to the soup. The slightly sweet corn and squash were a nice contrast to the otherwise spicy soup. I garnished the soup with some sour cream with chopped cilantro. You could also garnish the soup with some tortillas chips, grated cheese, avocado, etc.