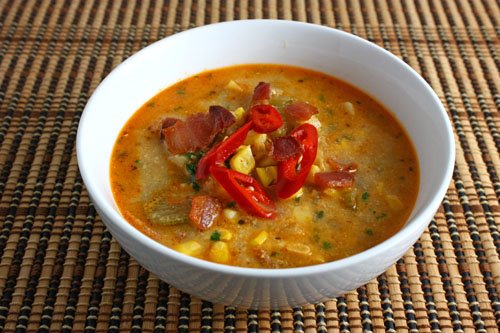 One of the things that I was just waiting to try with corn was a corn chowder and I got the chance to make one just before I went on my vacation. I was all prepared to do a standard creamy corn chowder until I came across this recipe for a more spicy corn chowder at The Kitchen Sink and I was led astray. I really liked the sound of using cumin and smoky paprika and chipotle along with the sweet corn in the chowder. Of course I could not resist making a few changes to the recipe like adding fresh jalapeno peppers and replacing the flour with corn meal. I also decided to leave some of the liquid as milk to give it a bit of the creaminess more commonly associated with corn chowder. A trick that I learned while making the sweet corn ice cream was to simmer the cob of the corn in the liquid to enhance the corn flavour and I used it while making this corn chowder. The chowder turned out good! I liked how the heat of the chillies and the smokiness played with the sweetness of the corn. The chowder was pretty hearty in addition to tasting great. The leftovers froze well and I got to enjoy the corn chowder again this week.