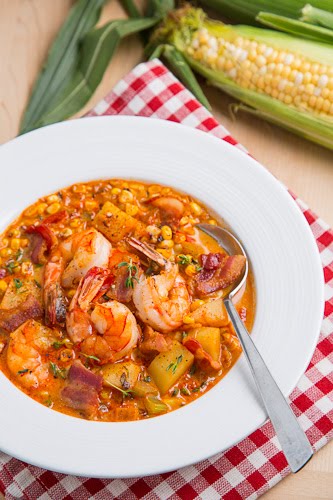 A creamy and smoky shrimp and roast corn chowder; a perfect way to enjoy fresh corn from the cob.

One of my favourite things about summer is all of the fresh corn on the cob and for the last few weeks I have been picking up a half a dozen or more ears every week! I recently came across the idea of a shrimp and corn chowder on Bev Cooks and I immediately took it as an excuse to update my dusty old corn chowder recipe and to add some succulent shrimp to it! Over the last few years I have picked up a few tricks to getting more flavour into soups like this and I seized the opportunity to do so with this new recipe for a shrimp and corn chowder!

First up was to get the most out of the soups liquid base and using a home made chicken stock or shrimp stock is a good way to start here. If you don’t have the time to make your own stock from scratch you can simmer a store bought broth along with the shucked ears of corn and shrimp shells to get some more flavour from them. Of course any soup can benefit from a little smoky bacon and cooking the vegetables in the soup in the remaining bacon grease will help even more. Up next is the corn and lately I have been enjoying ‘roasting’ the kernels in a pan over medium-high heat until they start to char a bit and this charring helps to caramelize the corn enhancing its flavour. I continued to build out the soup with more vegetables in the form of onions, celery and red bell pepper before seasoning it with garlic, thyme and smoked paprika. I finished the chowder off with some flour to thicken it a bit, a stewing potato to make it heartier and of course the cream.
Although you could easily go with salt, pepper and cayenne for the final seasonings, why not take the opportunity to add more flavour? Instead of salt you could easily use another salty ingredient like umami packed miso paste, fish sauce or soy sauce and since this chowder already has seafood in it I decided to go with fish sauce. Once again for the heat you could keep things simple and use cayenne or you could go with something with a bit more flavour like a sambal oelek or a sriracha.
I have to say that this is one of the tastiest corn chowders that I have had in a while! The bit of extra work to get more flavour from the ingredients definitely pays off but if you do not have the time you could easily skip the extra steps and still get one tasty pot of shrimp and corn chowder! 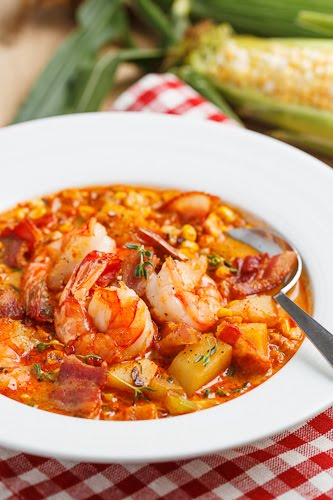 A creamy and smoky shrimp and roast corn chowder; a perfect way to enjoy fresh corn from the cob.