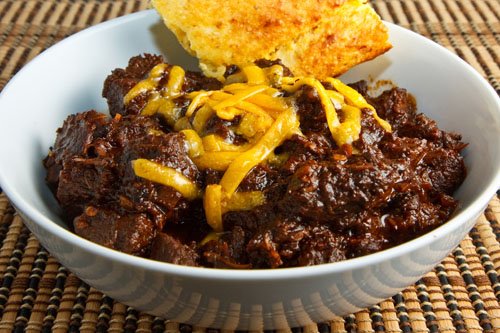 I really like chili and I am always on the lookout for new and interesting chili recipes to try. I recently came across a 7 chili chili recipe on Homesick Texan that caught my attention immediately. When I make chili I normally toast some dried chilies and then grind them up and use them in powdered form. This recipe called for reconstituting them in hot water and then pureeing them and I liked the sound of that. In addition to using the chilies in a new way it also used 7 different kinds of chilies including 5 kinds of dried chilies, chilies in adobo sauce and cayenne pepper. Another thing that I found interesting about this recipe was the fact that it was pretty much just meat, chilies and spices. I normally like to add things like beans and tomatoes to my chilies to give them more body and make them into more of a complete meal. Bacon grease is used instead of oil to brown the meat and saute the onions, which is always a positive in my books as it adds a ton of flavour. When choosing liquids for stews you can just use water or you can you the opportunity to add more flavour and this recipe does so by using both beer and coffee. I also liked the use of the cinnamon and the Mexican chocolate which adds a nice hint of the exotic to the chili. One of my favorite ways of cooking meats lately has been braising. Braising takes a while but the meat comes out nice and tender and fall apart good. This chili calls for a good long braising of the beef which just sealed the deal and it made it to my meal plan.
This 7 chili chili took a lot of time and a bit of effort but the results were really worth it! One thing that I made sure to do when making the chili was to add the chilies a bit at a time. There was a lot of the pureed chilies and I added about half of it initially and then let the chili simmer for an hour or so to let the flavours mingle a bit. I then taste tested it and added more of the chili puree until I got it to the heat level that I wanted. In the end the chili was nice and spicy hot, just the way I like it! Then beef was perfectly cooked and fall apart in your mouth tender and covered in the spicy and tasty chili sauce. I served the chili with some freshly made cottage cheese cornbread which did a good job of cleansing the palate in between mouthfuls of the spicy chili.