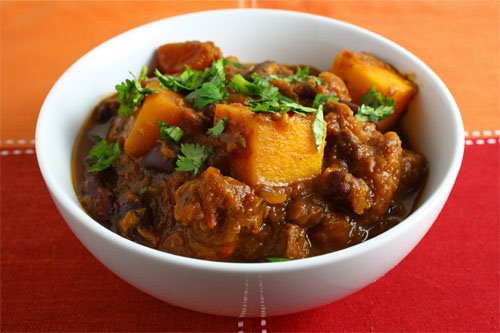 It seems that the tacos al pastor had just whet my appetite for texmex and I had been away from pumpkins and squash for too long. I knew just the dish to satisfy both cravings, a squash chili mole . I came across the idea of a pumpkin chili mole on What’s Cooking a while ago and I bookmarked it right away. The basic idea is that it is a chili with both pumpkin and aspects of a mole sauce such as chocolate in it. I had made and enjoyed a mole sauce a while ago and I liked the idea of adding some chocolate and cinnamon along with some squash to a spicy chili.
I had a large butternut squash that needed to be finished so I used that instead of a pumpkin. I wanted to have both the texture of large chunks of squash and the flavour distribution of some pureed squash so I cut half of the butternut into cubes and roasted and pureed the other half for the best of both worlds. I like to use cubed beef in my chili and that means that I get the chance to braise it until it gets nice and tender. I did not want the butternut to be all mushy by the end so I simmered the sauce with out the cubed squash until the meat was done and then I added the squash and cooked until it was also tender.
The squash chili mole turned out pretty good! I really enjoyed the way the sweet squash worked in the spicy chili. There was a nice hint of chocolate and cinnamon that made the chili seem somewhat exotic without overpowering the dish. I served the squash chili mole with a dab of sour cream and some chopped cilantro on top and some pumpkin rolls on the side to sop up the tasty chili sauce. While I was eating the chili I was thinking that another interesting version would be to replace the chocolate with pumpkin pie spice and to use turkey instead of beef. Maybe some cranberries could be worked in as well.