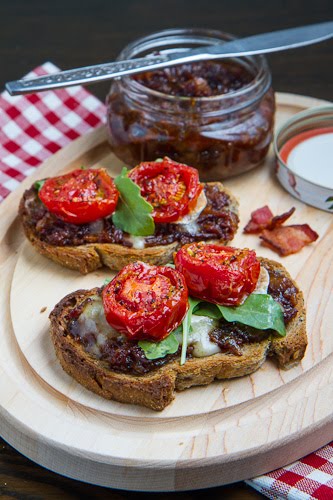 So far I have brought my bacon jam out for breakfast, simply on toast, and for lunch in the form of a bacon jam and avocado grilled cheese sandwich with fried egg and now it was time to show it off at a party in the form of an appetizer! Ever since I made the bacon jam I had been thinking about how well bacon and tomatoes go together and I wanted to use them together in some way. With all of the flavour that the bacon jam is packing a regular old tomato might be a bit scared so I decided to fortify the tomato by roasting it and building up its flavour to match. In order to bring the bacon jam and roast tomatoes together I placed them on some bread to make crostini but there was one more guest that had yet to arrive, the cheese. Once the bacon jam had been spread out over the bread I added some brie and after a quick visit to the tanning salon, I mean under the broiler, the brie was all melted, ooey and gooey and ready to party! With the addition of a peppery arugula garnish everything was set and it promised to be a tasty party indeed!
These crostini make for great appetizers when made on small pieces of bread like sliced baguette or they make a nice light meal when made on larger slices of bread. 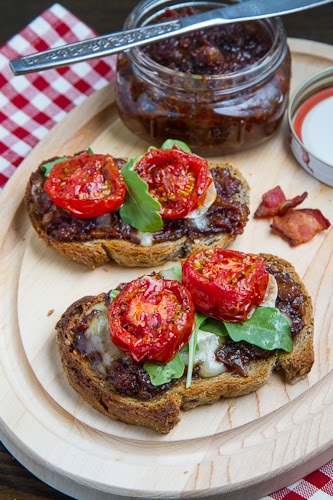