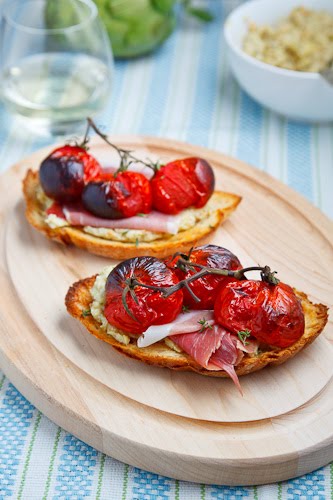 A chunky artichoke and olive tapenade with asiago that is packed full of flavour. Enjoy it for dipping or use it as a condiment on crostini or in sandwiches.

I only just discovered artichokes a few years ago and I have been hooked ever since! The other day while I was in the grocery store I noticed a jar or artichoke tapenade and an artichoke tapenade sounded like a great idea! I was already thinking about a recipe for the tapenade while dreaming about the ways that I would use it.
Although the artichoke tapenade in the store did not include any olives, I could not imagine it without and I was thinking that some nice big green olives would add a hit of salty goodness and a dash of colour. For the artichokes I went with canned because they were on hand and I seasoned them with fresh chopped garlic and capers along with some lemon juice to add a refreshing brightness. In my mind a tapenade is somewhat similar to a pesto and I always enjoy adding cheese to pestos so I tried adding some grated Asiago to the artichoke tapenade. The tapenade was as easy to make as doing a little pre-chopping and then giving it a few pulses in the food processor. 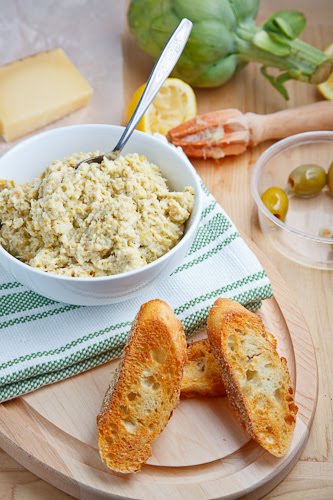 When I first encountered the idea of the artichoke tapenade I though it was going to be good but I did not know just how good it would be! After tasting for the correct seasoning I found it difficult to stop eating it by the spoonful; I mean I still had photographs to take before it disappeared! When I first served it, I went with something simple, an appetizer with toasted baguettes for dipping or spreading and it was a great way to show off the flavours of the artichoke tapenade. Next up I made a light meal out of it by spreading some on toast and topping it with prosciutto and roasted tomatoes and it was simply delightful! Luckily this recipe makes a lot and I was able to save some for one more dish using it. 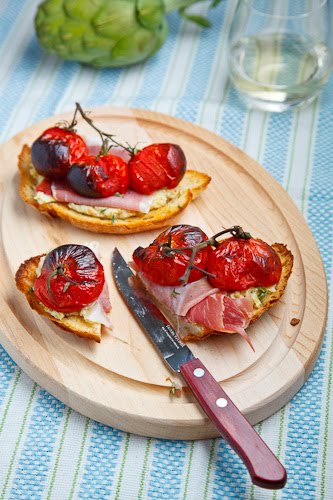 A chunky artichoke and olive tapenade with asiago that is packed full of flavour. Enjoy it for dipping or use it as a condiment on crostini or in sandwiches.