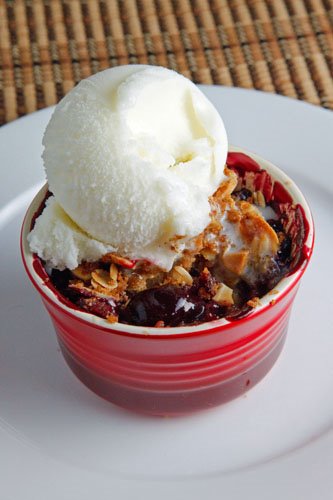 Cherry season is in full swing and I have certainly been enjoying them. With them being so cheap I have been getting a lot of them; perhaps too many and I needed to do something to go through them faster. The first thing that came to mind was a cherry crisp. I always enjoy crisps because they are so easy to throw together and they are always really good. While I was thinking about the cherry crisp I remembered that an almond flavour went really well with the cherries in the cherry clafoutis and I thought that it would also probably go really well in a cherry crisp. I decided to add the almond flavour to the crisp by adding a splash of amaretto to the cherry filling and by adding almond slices to the topping. Normally I would make a crisp in an 8 inch square baking pan but this time I thought that I would change things up a bit and I made it in individually sized ramekins. The cherry crisp was really easy to make (though, pitting all of those cherries took a bit of time) and it turned out great! The almond flavour worked really well in the cherry crisp and I rather liked the individually sized ramekin servings. Of course the scoop of vanilla ice cream finished off the cherry crisp perfectly. Overall it was a great way to enjoy the abundance of cherries!