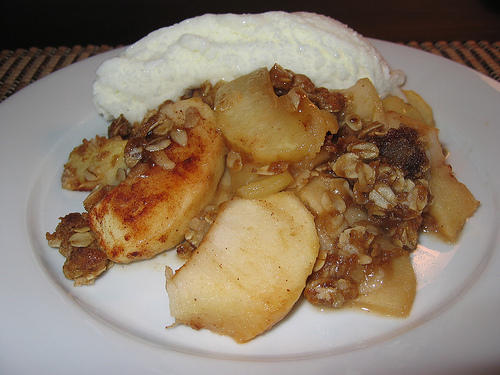 The theme for this months Sugar High Friday being hosted at SpiTtoon Extra is Drunken Apples . I like this theme because local apples are in season and I have been getting different varieties from the farmers market each week. I have been looking forward to making an apple crumble for a while now. I ended up using the following apples in the crisp: 2 Honey Crisp, 1 Mutsu, and Jona Gold. For the drunken part I though that I would try adding a little Amaretto to the crisp. Amaretto is an almond flavoured liqueur that I recently tried. It added a nice subtle almond flavour to the crisp. The crisp was really good and the melting vanilla ice cream was the perfect topping.