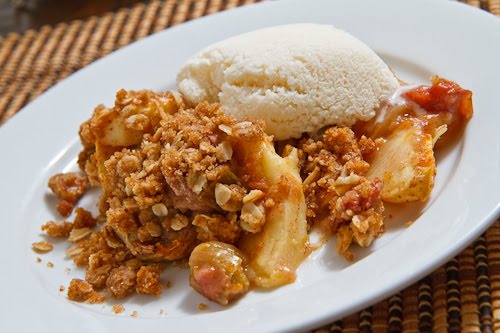 It seems that I have not been doing too many desserts recently and I had been craving something sweet. I always enjoy using fruit in desserts and one of the quickest, easiest and most rewarding ways of using fruits in a dessert has to be in the form of a crisp or a crumble. They are pretty much as easy as; prep the fruit, mix the crumb topping, pour them into a baking dish and bake. Though I tend to use use fruits that are in season, sometimes I cheat and freeze some fruit for later. Apples are great for crisps and normally I would pair them with cranberries for a tart counter balance to their sweetness but when rhubarb was in season during the summer I thought that rhubarb would also work well with apples so I froze some for later. The other day while I was rooting around in my freezer I came across that rhubarb and it was finally time to try the combo out. The rhubarb ended up surviving the freezer in pretty good condition and went on to make a really nice apple rhubarb crisp! The tart rhubarb worked just as well with the sweet apples as I had been hoping for. I of course served the crisp with some melting vanilla ice cream.
Tip: I like to split the leftovers into individual sized servings and freeze them in plastic containers. If I want a sweet dessert I simply pull one directly from the freezer to the microwave and give it two minutes on speed defrost followed by two minutes on high. With that and a scoop of vanilla ice cream I have an amazing treat whenever I want in under 5 minutes.