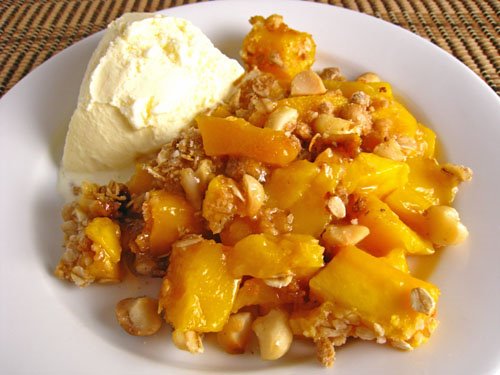 Crisps are among my favorite desserts and although I have been enjoying apple and pear crisps I have been looking forward to spring and summer crisps. Not too long ago I came across the concept of a mango crisp which sounded really good. I had never even thought about using mangos in a crisp and I just had to try it. Now that the mangos are in season I got the chance to make one. I had also recently come across the concept of adding nuts to the crust of a crisp and I thought that adding some macadamia nuts to the mango crisp would be a good ideal. Continuing with the tropical theme I also thought that some coconut would do well in the crust. I had also been experimenting with cardamom and I thought that a touch of it would add a really nice fragrance. Crisps come together really easily and the hardest part is waiting for them to bake. The mango crisp with macadamia nut crust was amazing! I really liked how mango worked in a crisp. Mangos are naturally sweet and slightly tart and they held the crisp up all by themselves. The tropical topping was also really good! The hint of coconut and the crunch of the macadamia nuts added new dimensions to the crisp. Of course melting vanilla ice cream made the mango crisp even better!