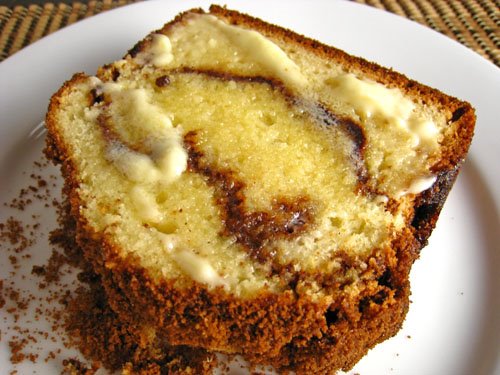 Cinnamon had been on my mind a lot and I knew that the only way ease my thoughts would be to indulge in it. I went through my bookmarks looking far a recipe that was full of cinnamon and found this one for a cinnamon loaf that sounded really good. This loaf is a plain quick bread with layers of cinnamon and a cinnamon topping. The recipe called for a full two heaping tablespoons of cinnamon which is more that I have ever used at once. This quick bread was a bit more work than most as it called for mixing the ingredients a bit at a time and pouring the ingredients into the loaf pan in layers. Despite the extra effort required it was still really easy to do. The smell of baking cinnamon is just amazing! The cinnamon bread turned out really good. It was light and fluffy and moist. The cinnamon layers were thick and full of cinnamon flavour and the cinnamon top was nice and fragrant and crumbly. Though the thoughts of cinnamon have receded for the moment, I am thinking that a rolled yeast based cinnamon bread is in my future.