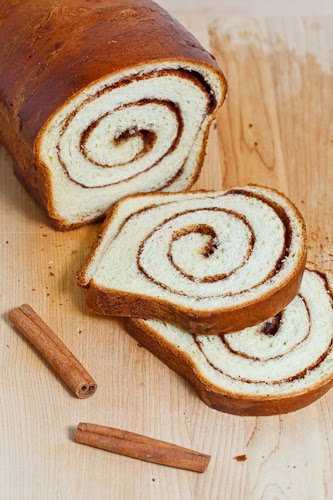 A light, fluffy and moist bread with swirls of cinnamon.

I am a huge fan of cinnamon! A long time ago now I made a cinnamon quick bread and I while I was enjoying it I remember thinking that I wanted to try a yeast bread version. Before I got a chance to try it, things came up, I got distracted and I forgot… and here we are 3 years later and I finally remembered! Being unable to resist the calls of thick swirls of sugary cinnamon in a light and fluffy bread I had to make it right away!
After searching for recipes for a while I decided to go with this recipe for a cinnamon swirl bread from The Pioneer Woman . This recipe starts off as a pretty standard white bread recipe with a bit of extra sugar and then you add the swirls of cinnamon. Adding the cinnamon swirls is pretty easy with you simply rolling the dough out, sprinkling on the cinnamon and then rolling it up to form a log. The hardest part about this recipe is all all of the waiting, especially when the bread is in the oven filling your place with the those amazing fresh baked bread aromas. 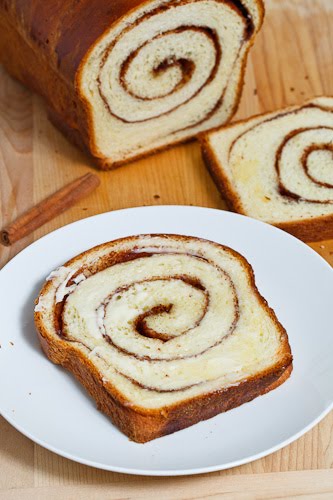 The cinnamon swirl bread turned out amazingly well! It has a solid crusty outside and a light, soft, fluffy and moist inside. The cinnamon swirls turned out perfectly and the aroma of the cinnamon was exhilarating! As soon as the loaf had cooled down a bit, I got into it, cutting off a slice and slathering it with butter that started melting into it right away. It is seriously hard to beat that first bite of a still warm, freshly baked bread with melted butter and the cinnamon in this bread seriously takes it over the edge! 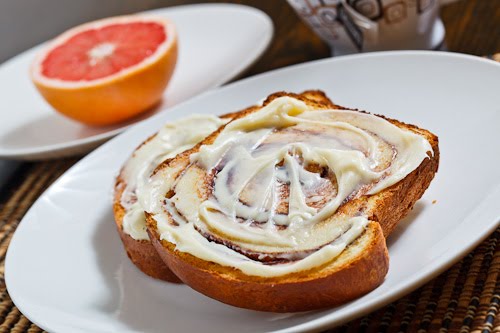 After that freshly baked bread euphoria wore off, I could not help but thinking that the sliced cinnamon swirl bread reminded me of cinnamon buns! With that thought I knew exactly what I was going to be having for breakfast the next morning, cinnamon bun bread. I made a simple cream cheese frosting and slathered it on some toasted slices of the cinnamon swirl bread. What an amazing way to start out the day!

A light, fluffy and moist bread with swirls of cinnamon.