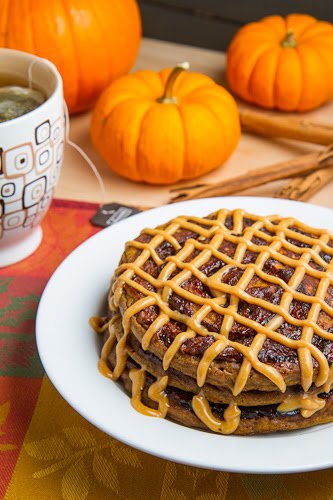 This weekend is the Canadian Thanksgiving and that means that it is time to make something special for breakfast and I knew just what I wanted to make. I have been wanting to try the cinnamon swirl pancakes from Recipe Girl ever since I saw them and Thanksgiving seemed like the perfect time to try the pumpkin pie version! I mean you really cannot go wrong combining two amazing things like pancakes and cinnamon rolls and throw in a third, pumpkin pie, and you have something that is sure to have every one coming back for seconds or even thirds! (The recipe easily doubles or triples!) 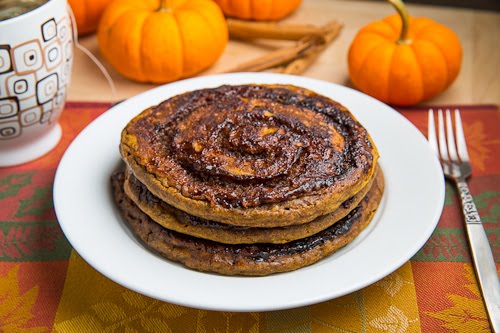 I know that Thanksgiving weekend, let alone Thanksgiving day, can be quite busy but these pumpkin pie cinnamon roll pancakes are as easy to make as making normal pancakes, and I used my favourite pumpkin pie pancake recipe, and swirling a mixture of cinnamon, butter and sugar onto the top of the pancake after pouring the batter into the pan. After that, once the bubbles arrive, you simply flip the pancake as normal and cook the swirl side. The swirl mixture on the pancakes surface causes the batter to cook around the swirl leaving a nice hole filled with cinnamon-y goodness! In addition to the swirl, some of the sugar in the swirl mixture actually caramelizes on the surface of the pancakes making them even better. The pumpkin pie pancakes by themselves are so delicious, light, moist and fluffy that they are sure to put you into pancake heaven but then add the cinnamon swirl and you take things way over the edge! These have to be my new all time favourite pancakes!
Tip: You want the swirl mixture of cinnamon, butter and sugar to be thicker, more paste like, rather than liquid and flowing for the best results. 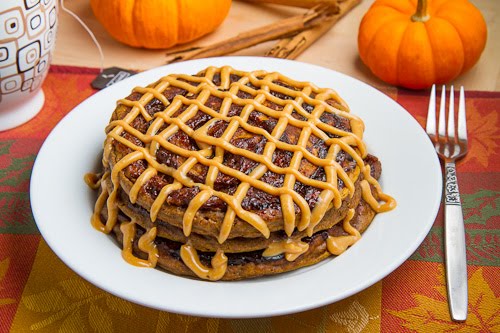 Although I could easily finish off a batch of these pancakes by themselves, I could not help but think about a topping! Normally pancakes are served with syrup but cinnamon buns are topped with frosting and although I had some tasty ideas for both syrups and frostings I decided to go with a frosting. A basic frosting would have been just fine but since caramel goes so well with pumpkin I could not resist using some caramel sauce as the sweeter for the cream cheese based frosting and it was absolutely divine! 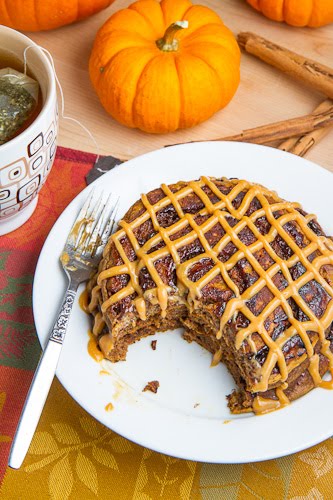