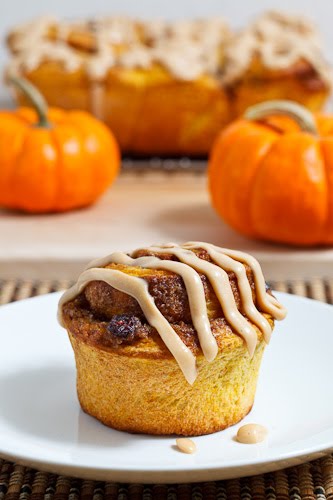 I have been looking forward to pumpkin season for a while and now that it is here I can dive into my some of the many pumpkin dishes on my to try list. The top item on that list was pumpkin cinnamons buns! The idea behind these pumpkin cinnamon buns was a simple adaptation of cinnamon buns that included adding pumpkin puree and pumpkin pie spices to the dough and adding pumpkin pie spices to the layer of cinnamon sugar in the middle. I started out with the recipe for the dough that I used in the blueberry maple pecan cinnamon buns and added the pumpkin puree while at the same time reducing the amount of other liquids in the recipe to balance things out. While I was at it I replaced some of the flour with whole wheat flour to make things a bit healthier. Next up was the ‘cinnamon’ filling layer where I replaced the white sugar with brown sugar and the cinnamon with pumpkin pie spices. At first I was going to add pecans and dried cranberries to the cinnamon layer but then I remembered how much I enjoyed the pumpkin and ginger combination in the pumpkin pie cheesecake and I decided to replace the pecans with chopped candied ginger. Next up was the frosting and once again thinking back to that cheesecake I knew that I would have to go with caramel and to keep it along the lines of cinnamon buns I mixed the caramel into some cream cheese.
The modified recipe for the pumpkin pie cinnamon buns worked like a charm! The yeast really seemed to like the pumpkin as this dough rose more than I have ever seen dough rise. As I pulled the cover off of the risen dough I could smell the amazing aroma of pumpkin pie mixed in with fresh bread and it only got better when I popped the buns into the oven. (A 9×13 inch baking pan is ideal for this recipe but I only had a 8×8 inch pan so I placed the remaining buns into ramekins.) As the buns baked the aroma intensified and the anticipation built up to the point where I was eagerly peering in the oven window just waiting for them to be finished. When they came out of the oven I could barely wait for them to cool down a bit before slathering on the frosting, taking some photos and then digging in. I have to say that even with the high expectations these buns did not disappoint and I will definitely be looking forward to breakfasts this week! The buns themselves were nice and light and tender and moist and the pumpkin flavour came through beautifully. The cranberries and candied ginger worked really well in buns and the caramel cream cheese frosting took them over the edge! 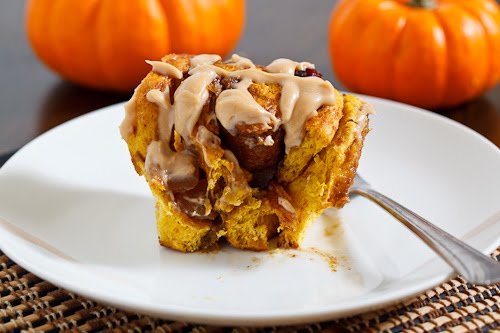