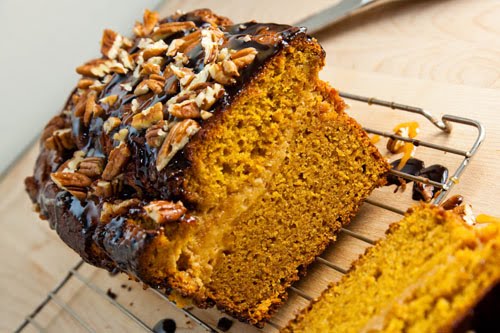 Pumpkins are in season and really cheap right now so I have a few of them on hand just waiting to be used. When I recently came across this recipe for a pumpkin caramel cheesecake bread on Culinary Concoctions by Peabody I knew exactly what I would be using one of those pumpkins for. How could I resist making this? With pumpkin, caramel and cheesecake all rolled up into one there was no way that I could. I pretty much just used the recipe as it was, though I cut back on some of the sugar and replaced half of the flour with whole wheat flour. One of the things that I really like about quick breads is that they are so easy to make. You pretty much just mix all of the ingredients and then bake it. This quick bread had the added step of mixing the cheesecake filling but it was still really easy to make. While the bread was baking my apartment was filled with an amazing pumpkin and caramel aroma and by the time that it was done I could barley wait for it to cool to try it. The pumpkin caramel cheesecake turtle bread was so good! The cheesecake layer helped keep the bread nice and moist and it went really well in the bread. The caramel and pumpkin flavour combo was simply amazing and of course it never hurts to add chocolate and pecans. I certainly am looking forward to having this for breakfasts this week!