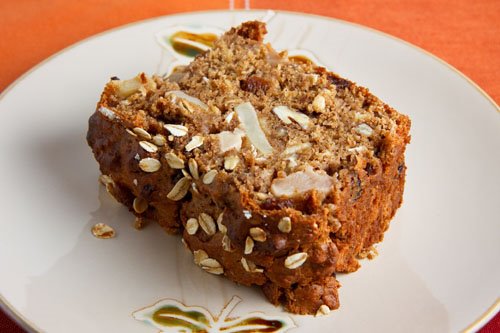 While I was thinking about what I wanted to do for breakfasts this week my thoughts kept coming back to apples, cinnamon and oatmeal. Although apple and cinnamon oatmeal sounded good, I thought that I would make it a bit more interesting and do an apple and cinnamon oatmeal bread. I wanted the bread to be full of apple flavour and to have nice big chunks of apple with every bite. To achieve this goal I used both large pieces of chopped apples and some of my own home made roasted apple sauce in the bread. Of course there had to be a lot of cinnamon and I thought that some raisins and chopped pecans would finish off the bread nicely. In addition to using rolled oats in the bread I garnished it with some more. The apple and cinnamon oatmeal bread turned out great! It was nice and light and fluffy and moist and full of appley goodness! I really enjoyed the texture provided by the chunks of apple, the rolled oats and the raisins and nuts. I think I might just have a new favorite quick bread.