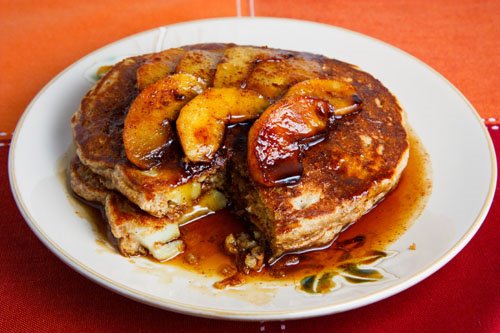 Despite the fact that my weekend was pretty busy, I managed to find the time to make a nice breakfast. I have been enjoying pancakes for breakfast on the weekends recently and this weekend apples were on my mind. I was thinking that pancakes with apple pie flavours would be great! I decided to go with a healthier recipe and made the batter with whole wheat flour and ground up rolled oats. While I was thinking about oats my mind wandered to apple cinnamon oatmeal and apple crisp with a rolled oat topping and I thought why not add some whole rolled oats for some additional texture? Speaking of texture, I wanted there to be nice big chunks of apple in the pancakes so I added some sliced up apple. I also wanted to maximize the apple flavour so I added some apple sauce. It was the perfect excuse to make some more roasted apple sauce . Of course I could not forget the cinnamon and I rounded the pancakes out with some ample syrup. But I did not stop there; I also topped the pancakes off with some caramelized apples and maple syrup. The apple and cinnamon oatmeal pancakes topped with caramelized apple turned out great! The were nice and moist and light and fluffy and good! I really liked the chunks of apple in the pancakes and the overall texture of the pancakes was rally nice. These pancakes were definitely full of apple flavour. I can’t wait to make these again!