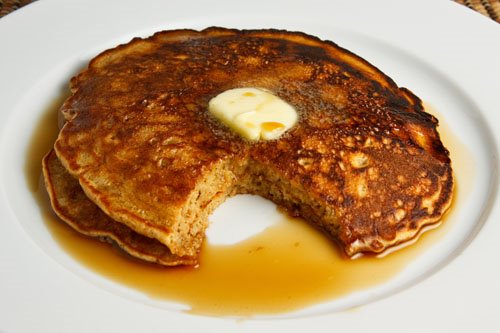 I recently received some sample maple products made by a company in Quebec called Brien . Maple is one of my favorite flavours and I was eagerly awaiting trying out these new maple products. Of course the package contained some maple syrup and I could not think of a better way to start out my exploration of the maple products than with pancakes with maple syrup. I have also recently been into ginger and I was thinking that gingerbread pancakes would be a good idea. I started with a basic pancakes recipe, with some of the flour replaced by whole wheat flour, and added some of the flavour elements from the gingersnap cookies that I had recently made including the ginger and some cinnamon, cloves and molasses. The gingerbread pancakes turned out great! They were nice and light and fluffy and full of that gingerbread flavour that I like so much. I served them with a dollop of melting butter and of course the maple syrup. It is really hard to beat pancakes with high quality maple syrup for breakfast!