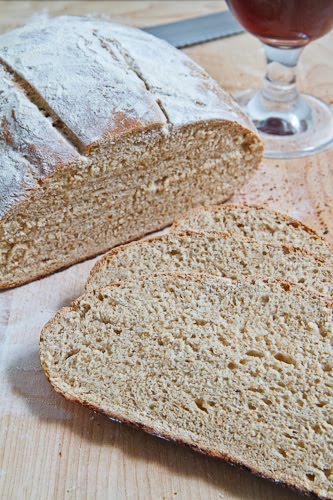 Last week I got the chance to talk to some of the Fathers of Grimbergen Abbey from Belgium who were in here in Toronto for the launch of Grimbergen Dubbel in Canada. I learned a bit about their over 800 years of history including about the destruction of their Abbey no less than three times. Of course I also got the chance to sample some of their double fermented abbey beer and I particularly liked the undertones of caramel in it.
After an evening of talking about beer, I realized that it had been a while since I last did a recipe with beer in it and by the time that I got home I knew that I would have to try a Grimbergen Dubbel beer bread. When you think about beer breads you normally think about quick breads but I had already had a few ideas for beer bread sandwiches and quick breads do not hold together well enough for sandwiches. I figured that I would need to do a yeast based beer bread and after contemplating different recipes for a while, I decided to go with the recipe that I am most familiar with, a French bread recipe , and I simply replaced the water with beer. I also used some whole wheat flour which I though would go well with the rich flavoured beer.
Although this recipe is fairly easy, it does require a few minutes of kneading and a bunch of time to let it rise twice and then some more time to bake it and let it cool. Even with the effort required, you will instantly know that it was worth it the second those amazing aromas of fresh baked bread start coming from the oven and the addition of beer only makes it better! With the whole wheat flour, this bread is a little heavier than a white bread but it is still pretty light. This bread also has a fantastic, perfectly crisp crust that protects the moist and tender insides. The flavours and aromas of the beer in the finished product is subtle but definitely apparent. Now that I have my loaf of beer bread, I am looking forward to trying it out!
(This bread would also work well with an Irish beer for St Patrick’s day coming later this month.)