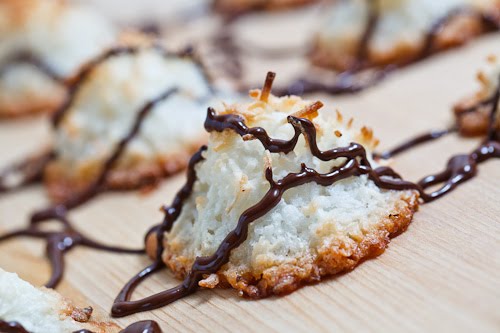 Enough with reminiscing about holiday cookies past, it is time to kick off this years holiday cookie baking! First up on the list was a classic, coconut macaroons ; not to be confused with macarons . Coconut macaroons are really simple containing just shredded coconut, sugar and egg whites to hold it all together. You bake them in the oven until they turn a nice light golden brown on the outside and after they cool they have an amazing slightly crisp outer layer but the inside is nice and moist and tender and oh so good! If you are a fan of coconut then these macaroons are definitely for you! For a lighter and fluffier version you can beat the egg whites and sugar until they form stiff peaks before folding in the coconut. Speaking of coconut, one of the best things to pair coconut with is chocolate and I could not resist drizzling some melted dark chocolate over my coconut macaroons!