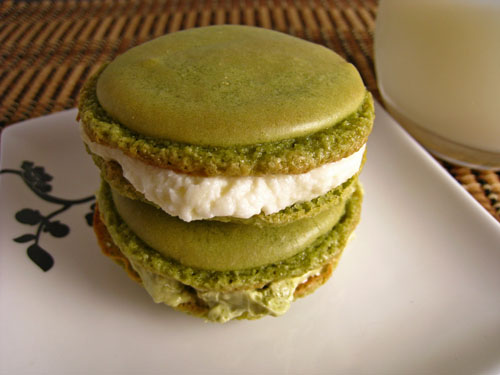 Shortly after I started food blogging I came across he concept of macarons. Macarons are a French pastry made with almond powder, icing sugar, egg whites, and sugar. (The short list of ingredients makes the macarons sound deceptively easy to make.) The macarons form a sandwich with a layer in between. I had some green tea buttercream and white chocolate ganache left over from making my green tea and white chocolate opera cake and I thought that they would make nice fillings for macarons. I decided to continue with the flavour theme and went with green tea flavoured macarons.
I have to admit that the first batch of macrons did not turn out too good. They stuck to the parchment paper and they were all destroyed as I tried to get them off. I thought that greasing the parchment paper with butter might help so I tried a second time. I was a bit upset when the second batch also stuck to the parchment paper but I decided to leave them for a while after destroying only two of them. After a few hours I tried again and they came off easily. Maybe a silicone sheet would be handy for things like this?
All of the effort was worth it as the macarons tasted great! They were nice and light and airy. I really enjoyed the matcha flavour of the macarons and it went well with the green tea buttercream and white chocolate ganache fillings. I look forward to making macarons again and trying different flavours.