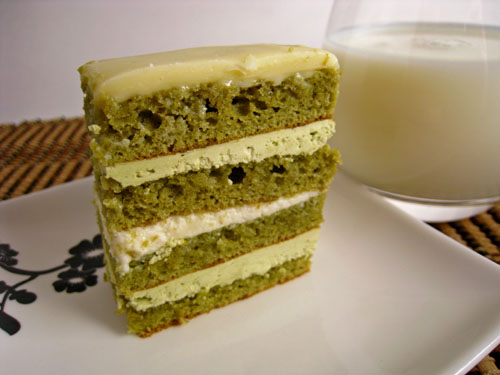 This months Daring Bakers challenge was an opera cake. The opera cake sounded pretty challenging having no less that five different components. The components included a cake, a syrup, a buttercream, a ganache and a glaze. The thing that I liked most about the challenge was that we were allowed to choose the flavours in the cake as long as the colours remained light. I decided to go with one of my current favorite dessert flavour combinations, green tea and white chocolate. 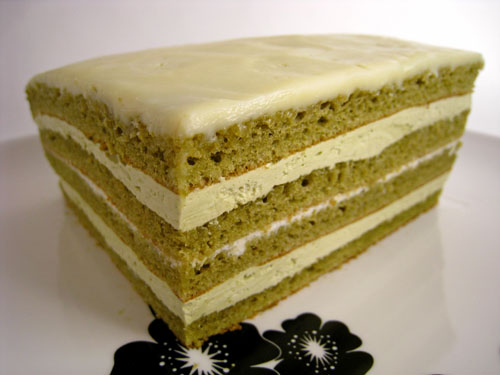 Note: I halved all the recipes for all components as I did not want such a large cake.
Green Tea Cake
The first component of the opera cake was of course the cake. The cake sounded pretty interesting because it used ground almonds. I wanted the cake to have a green tea flavour and have a green colour so I added some matcha. The cake came together pretty easily and it had a really nice shade of green.
Green Tea Syrup
The cake in the opera cake needed to be moistened with a syrup. The syrup was just a simple syrup with some added flavour. I remembered that I had seen some green tea liqueur and I though that it would go well in the syrup. The green tea liqueur was a nice dark green and it tasted like green tea and had hints of spices and berries. It added a nice aroma to the syrup and the opera cake.
Green Tea Buttercream
There was a bit of confusion with the recipe for the buttercream and in the end I was not sure what recipe to use so I used the recipe from the Perfect Party Cake challenge. I decided that I wanted the buttercream to be green as well so I added some matcha to it. The first time that I made buttercream it did not work out too well. The second time I got a nice finished product but it took about 20 minutes of beating the cream by hand. This time everything came together easily with less than 5 minutes of beating by hand in the final step. Given the amount of beating in the other components I was a bit relieved. The buttercream ended up with a nice light green colour and tasted great. Must keep fingers out of butter cream.
White Chocolate Ganache
The ganache was the first of the white chocolate components of the opera cake. I had made chocolate ganache before but I have never tried folding in whipped cream in addition to melting the chocolate into cream. The whipped cream left the chocolate light and fluffy. Unfortunately it also left the ganache a bit runny and a lot of the ganache ran out from the middle layer of the cake. Putting it in the fridge for a while fixed that problem though.
White Chocolate Glaze
The opera cake was topped with a simple white chocolate glaze that came together easily.
Assembling the Opera Cake
Assembling the cake was the funnest part of the challenge. After the cake was assembled I chilled it in the fridge and then trimmed the sides to get nice and straight edges.
Overall the opera cake was not too difficult to make and it turned out really good! It tasted great and it disappeared quite quickly! The slight bitterness of the green tea tempered the sweetness of the white chocolate nicely. The cake was nice a moist and light and creamy at the same time. I really enjoyed the opera cake challenge. 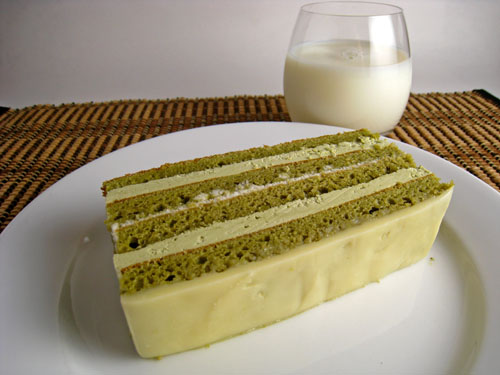