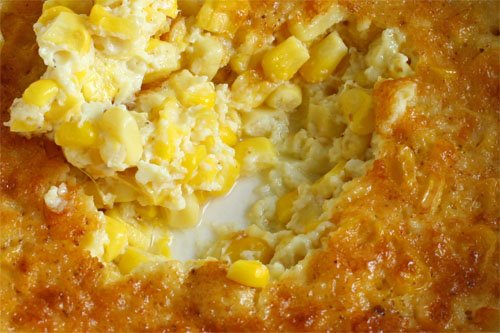 When I was a kid I was not too thrilled with puddings and just having the word pudding in the name was enough for me to lose interest. Now a days I have been enjoying exploring the world of puddings and when I came across the concept of a corn pudding I knew that I would just have to try it. I filed the bookmark away with all of the other corn recipes that were just waiting for corn season and I got the chance to make it just before I left on vacation. I found a lot of corn pudding recipes that called for canned corn so I guess I did not need to wait until corn season but since I had, I looked for a recipe that used fresh corn. I found a simple and tasty sounding recipe for corn pudding on A Yankee in a Southern Kitchen . Since I was not too familiar with pudding recipes I left it pretty much as it was, though since I was leaving on vacation later in the week I cut the recipe in half so that I would be able to finish it before going. The recipe below made enough for two individual sized servings. Based on the recipe it sounded pretty much like a custard with corn and that is exactly what it turned out to be. Given that I really like corn and custard the combination of the two was wonderful. The first night I enjoyed it warm from the oven and the second night I enjoyed it cool from the refrigerator. I am glad that I tried the corn pudding and I am looking forward to making it again.