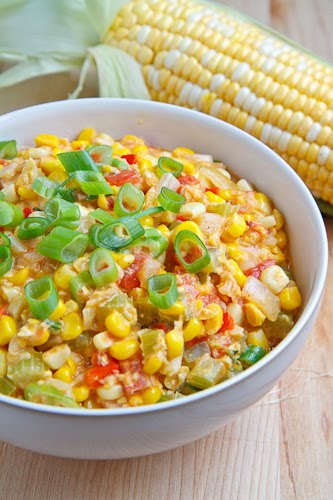 While I was in New Orleans one of the dishes that really stood out for me was a crab cake in a maque choux. Maque choux is a dish native to southern Louisiana consisting of corn, bell peppers, tomatoes and onions that is braised until the vegetables are nice and tender. Many maque choux recipes are pretty simple but it is surprisingly good, especially when you use ripe in season corn from the cob and tomatoes. Since both the corn and the tomatoes were in season when I got back the maque choux was one of the first dishes that I tried making at home from my trip to New Orleans and I have already made it several times!
One of the key pieces to the maque choux is its creaminess which can be obtained by using things like butter, cream or even bacon grease but the best source of the creaminess is the corn itself. When cutting the corn from the cob, only cut two thirds of the way through the corn kernels and then use the back of your knife to scrape the remainder off and it will form a nice and creamy ‘corn milk’.
Maque choux is generally served as a side but it could definitely be used as the base for a main. I know I certainly enjoy eating it by itself by the spoonful and it goes great topped with a bit of crumbled feta but I was also thinking that a shrimp maque choux would make for a great light meal. I would replace half of the cream in the recipe a tasty shrimp stock and then add shrimp near the end of cooking in this version. Other common additions to maque choux are bacon, andouille sausage, tasso or even ham, each of which would add a ton of flavour!